President Pokes God in the Eye

I thought about writing on something other than this news item that almost certainly involves Bible prophecy. Many, no doubt, will make this the focus of their commentaries this week, thus further consideration might just be duplication. But it is just too profound a matter not to address the things encompassed by the story. 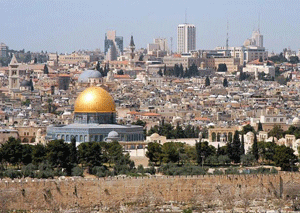 Jerusalem - the city about which Jesus prophesied while sitting atop the Mount of Olives, giving the many signs that comprised the end of the age and His Second Advent - is directly in the news bull's-eye with this story. Jerusalem is the most important city on the planet, in God's holy eyes. And it is in this regard that this news item takes on such gravity, particularly for the United States of America.

The Scripture to consider is this:

Thus saith the LORD of hosts: "After the glory hath he sent me unto the nations which spoiled you: for he that toucheth you toucheth the apple of his eye. For, behold, I will shake mine hand upon them, and they shall be a spoil to their servants: and ye shall know that the LORD of hosts hath sent me." (Zech. 8-9)

This is a chilling pronouncement on anyone who would cause Jerusalem to come under any control other than the Lord God of heaven. Just previous to these verses, Jerusalem is measured by God Himself. There is no doubt: Jerusalem is His, and it is for His people alone - the house of Israel.

The news story in question - the one that no doubt will be analyzed and dissected by those who study Bible prophecy from a literal perspective - is excerpted here:

A widely predicted crisis between Israel and the United States upon Benjamin Netanyahu taking office as prime minister finally erupted this weekend.

U.S. President Barack Obama did not hold back in condemning the humiliation caused to Joe Biden with the Israeli announcement of 1,600 new housing units in East Jerusalem during what was supposed to be the vice president's friendly visit to Israel.

Instead of accepting Netanyahu's partial apology and letting bygones be bygones, Obama issued a stern warning to the Israeli prime minister and is now demanding that he take "specific actions" to show he is "committed" to the U.S.-Israel relationship and to the peace process itself. (My sincere thanks to John Stettin for providing the articles excerpted in this commentary: "Netanyahu Must Choose between Ideology and U.S. Support," Haaretz - Israel News, http://www.haaretz.com/hasen/spages/1156251.html).

U.S. Secretary of State Hillary Clinton relayed a message to the Israeli prime minister in a lengthy phone conversation, during which, it was reported, Netanyahu scarcely got in a word edgewise. And the castigation of the Israeli leader continued from those within the U.S. presidential administration. It is clear - to me, at least - that the Obama administration has been waiting for just the right moment to manufacture a crisis in the matter of Israel constructing housing in east Jerusalem. The leverage the American government can bring against Netanyahu and the Israeli government is obvious.

There is no one, in terms of national entities, to stand with Israel against the threat from Iran, other than the United States. America alone supplies fuel and spare parts for Israel's air force, as well as the warning signals for any missiles that might be headed Israel's way. So, Prime Minister Netanyahu is confronted by a dilemma: Either go along with the American presidential administration and accept whatever Mr. Obama dictates to appease Israel's enemies, or suffer loss of American support regarding Iran. He is expected by the world powers-that-be to embrace whatever the international community - led by Barack Obama - thinks might be good for the "Roadmap to Peace."

Mainstream U.S. and world news media seemingly always come down against Israel's right to determine the disposition of Jerusalem, and solidly for the Palestinians' right to east Jerusalem as a future Palestinian state's capital.

Always, the news, it seems, is written in a way that is against Netanyahu and Israel. Most frequently, the stories are framed as derogatory opinion pieces rather than written in the style of true news journalism. An example is the following report about the current America/Israel "crisis" from an AP reporter:

Israel does not stand to benefit from antagonizing its most important ally, but Netanyahu has historically taken a hard line against territorial concessions to the Palestinians, and a curb on east Jerusalem construction would threaten to fracture his hawkish coalition. ( "US Wants Israel to Cancel Building Plan," Associated Press, 3/15/10)

So, the American president, the international community of leaders, and the world news media combine to continue to try to force Israel into their own mold for world peace, which they obviously believe must begin at Jerusalem. They aren't far wrong in that opinion. The peace of Jerusalem is something for which God's people are told to pray:

All nations who consort to bring this false peace against God's holy city will suffer the fate of being cut in pieces by the God of Abraham, Isaac, and Jacob (Zech. 12:1-3). Every one of them will be brought to account at Armageddon for trying to deal treacherously with God's chosen nation and people (Joel 3:2). Mr. Prime Minister, it is Israel's God - the Only God that exists - to Whom you should bow, and upon Whom you can depend for Israel's ultimate defense.

No matter if it's prelates, potentates, or presidents - any nation whose leaders poke their fingers in God's eye by dealing harshly with Jerusalem will be brought to account when the Prince of Peace sits on His throne atop Mt. Zion in Jerusalem.

When the Son of man shall come in his glory, and all the holy angels with him, then shall he sit upon the throne of his glory: And before him shall be gathered all nations: and he shall separate them one from another, as a shepherd divideth his sheep from the goats And he shall set the sheep on his right hand, but the goats on the left... Then shall he say also unto them on the left hand, Depart from me, ye cursed, into everlasting fire, prepared for the devil and his angels... And these shall go away into everlasting punishment." (Matt. 25: 31-33, 41, 46a)

PM to tell AIPAC Jerusalem not a settlement - Ynetnews

US Envoy Calls for Restraint Between Israel, Palestinians - Voice of America