The Palestinian Authority has made a strategic decision to coordinate continued "resistance" in the eastern sections of Jerusalem, according to Palestinian security sources speaking to WND. 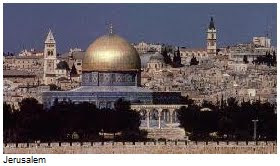 The sources, close to both Hamas and PA President Mahmoud Abbas' Fatah party, said Palestinian protest activities will focus on Jerusalem instead of the West Bank in hope of increasing pressure against Israel to discuss final-status issues in proximity talks brokered by the Obama administration.

The activities are being coordinated by the PA, at times working alongside the Hamas-allied Islamic Movement, although Hamas is wary of working with its PA rivals.

PA elements led by Hatem Abdel Kader, a top Fatah official in Jerusalem and the former PA minister for Jerusalem affairs, are involved in planning riots in Jerusalem, the sources said.

Also, Fatah strongman Mahmoud Dahlan, a longtime rival to Hamas, has talked to Hamas about collaborating on a strategy for riots in Jerusalem, the sources said. Hamas did not immediately reject the overture.

Just yesterday, Abbas himself announced the Palestinian people had a national right to "resistance" against what he called Israeli occupation, adding that his government would not acquiesce to any Israeli demands with which it disagreed.

Abbas was speaking just after a meeting in Amman, Jordan, with U.S. Mideast envoy George Mitchell.

In an interview with WND last week, Hamas' chief in Gaza, Mahmoud al-Zahar, said his group cannot rule out the initiation of a third intifada, or "uprising."

"If you are going to read what is the meaning of the intifada in the political books, one of the characters is that nobody can expect how it could start or continue, so everybody now is upset about what happened yesterday," Zahar said.

Zahar spoke as clashes called for by Hamas were started by Palestinians in Jerusalem and the West Bank, purportedly in protest of Israel's rededication of an ancient synagogue in the city one day earlier.

"This is how the first intifada started," he said, speaking by cell phone from Gaza. "People demonstrated in Jerusalem and it escalated. Nobody will know what happened, but I can image that everyone inside and outside Palestine is deeply frustrated in the Israeli building nearby al-Aqsa Mosque at this particular time."

Israel last week rededicated an ancient synagogue in the main Jewish quarter of the Old City. The structure had been badly damaged by Jordanian forces when they overran the Jewish Quarter in the 1948 Middle East war.

The Hurva synagogue is located hundreds of feet from the Western Wall and is in no way connected to the Temple Mount. Israel did not conduct heavy construction on the synagogue, a structure that had been in the Jewish quarter since the 2nd century.

Still, the PA and Hamas claimed Israel's rededication ceremony was a threat to the al-Aqsa Mosque. Hamas called for a "day of rage" last Tuesday, prompting Palestinians throughout eastern Jerusalem to hurl stones at police.

Israeli security forces responded with tear gas and fired rubber bullets, according to witnesses. More than 60 Arabs were arrested in violent protests in the Jerusalem neighborhoods of Isawiyah, Abu Dis and Wadi Joz.

Obama to Blame for Palestinian Violence?

Some analysts here are blaming the Obama administration for emboldening the PA and Hamas. The U.S. has come down hard on a decision by the Jerusalem municipality to approve 1,600 new homes in an already-existing Jewish community in eastern Jerusalem.

The decision was made public during Vice President Joe Biden's visit to the region two weeks ago.

The Palestinians claim eastern Jerusalem as their future capital, while Prime Minister Benjamin Netanyahu has made clear he does not intend to give up the Jewish sections of the city.

Netanyahu stated he had not been aware of the decision to build in Ramat Shlomo and that the announcement was not timed to coincide with Biden's visit.

The two reporters continued: "The PA has smelled blood. It understands that the international community will not concern itself with secondary details, such as the fact that the synagogue in question would no doubt remain in Israeli territory under even the most generous future peace agreement. So why not start a riot and blame the Israelis, especially when the U.S. government is doing the same."

Houses a Key Part of Dispute Over East Jerusalem - AP