President Obama’s vision of “a world without nuclear weapons” may delight the ears of Nobel Peace Prize judges, but harsh realities flush that fairy tale. Today, our greatest risk of nuclear attack is from rogue states and terrorists. That means Obama needs a strategy that keeps the world’s nastiest weapons out of murderous hands - and that effort requires Russian cooperation.

Obama needs the Russians to cut and then protect their bulging nuclear arsenal from diversion and to cooperate against rogues like Iran. That challenge came to a head last week, and likely Obama will cave to Russian demands to advance his fairy tale nuclear agenda. 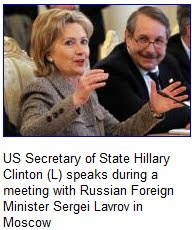 No telling what Clinton offered the Russians to get past this obstacle - perhaps scrubbing our ABM system - but what’s clear is Obama desperately wants these talks to quickly end successfully so to boost his credibility before he hosts a nuclear security summit in Washington next month.

Obama hopes to use that summit, which will include more than 40 heads of state and a non-proliferation conference at the United Nations in May, to prevent nuclear terrorism and secure all vulnerable nuclear materials in four years. This pledge - a cornerstone of his nuclear security policy - is intended to stop terrorists “determined to buy, build, or steal” a nuclear weapon. That’s a laudable pledge as long as the road to that goal can be safely traveled, but that’s the rub.

Obama’s first nuclear security policy test is the START agreement with the Russians. That agreement promises at least a 25 percent reduction in atomic weapons, from 2,200 strategic warheads which the U.S. now deploys down to between 1,500 and 1,675 warheads. It also radically cuts 1,188 to no more than 800 weapon platforms – ground-based missiles, missiles launched from submarines and bombers – used to deploy those warheads.

These cuts suit Obama’s determination to begin the process that eventually eliminates all our atomic warheads. He has already imposed a moratorium on weapons modernization but promises to update our weapons laboratories to assure what’s left of the arsenal is reliable. The Russians will continue to modernize their nuclear arsenal, however.

Obama is also pushing for passage of the Comprehensive Test Ban Treaty (CTBT) which was defeated during the Clinton administration. CTBT would be another nail in our nuclear arsenal’s coffin because testing atomic weapons is critical to making them reliable, which the U.S. has done thousands of times.

Not only does Obama intend to cut and stop modernizing our warhead arsenal he also intends to wean our military from atomic weapons. He plans to create conventional Global Strike Weapons that achieve the effects of nuclear weapons, without turning a conventional war into a nuclear one.

Perhaps the most important but still secret part of the administration’s nuclear weapons policy is its purpose. Senator Diane Feinstein (D-Calif.) called on Obama to adopt language saying the “sole” or “only” purpose of U.S. nuclear weapons is deterrence. Reportedly Obama’s security advisers want him to retain more ambiguous wording to keep our potential enemies guessing under what circumstances Obama would use the arsenal.

Consider how risky Obama’s START negotiations are turning out.

First, reducing our weapon arsenal and their delivery platforms is a balancing act. The U.S. secures its global interests via mostly conventional means - aircraft carriers, ground troops - but backs them up with nuclear arms. But the Russians are doing just the opposite because of budget constraints.

Michele Flournoy, Obama’s undersecretary for defense policy, said Russia is increasing its reliance on nuclear weapons which “…we find very troubling.” Moscow can’t afford a robust conventional force to secure its strategic interests so it is relying on nuclear weapons, which is at odds with Obama’s arms control agenda of declining reliance on atomic weapons to avoid nuclear war.

But by agreeing with the Russians to cut our nuclear arsenal and their delivery platforms we bolster their leverage. Equality in atomic systems is a significant gain for the financially strapped country especially now that Moscow declared it will rely on atomic weapons for most strategic security missions.

Second, it’s smart for the Russians to link our ABM system to the START agreement because it provides Moscow more leverage throughout its sphere of influence while undermining our defenses.

Last September, Obama tried to accommodate Russian objections to our planned ABM system by scrapping the ground-based system in Poland and the Czech Republic. He excused that decision by claiming that changing Iranian capacities required smaller ship-based interceptors rather than land-based mid-course interceptors. But that decision appears to have been a quid pro quo to gain access to Afghanistan via Russia. A third of American supplies now reach Afghanistan via Russia.

Obama’s replacement ABM system, the Phased Adaptive Approach, is intended to counter Iran’s existing short- and medium-range missiles. The U.S. plans to deploy 24 SM-3 theater-range missile interceptors in Romania by 2015 and in Poland in 2018.

Predictably, Putin claims the replacement ABM system also endangers the “Cold War-era balance of power” by diminishing the effectiveness of Russia’s arsenal. He threatens to counter our ABM by developing new offensive atomic weapons and insists as part of the START agreement the U.S. must provide Russia with data on our ABM missiles.

But providing Russia our ABM data compromises the system while giving Moscow an edge. The Kremlin improves on that edge with its new offensive atomic weapons while America scrubs any plans to modernize its arsenal.

Third, shrinking our atomic arsenal has a potentially negative effect for allies. Pentagon officials worry that allies that depend on our atomic umbrella could decide to develop their own nuclear weapons if they thought U.S. protection wasn’t assured.

Japanese officials, for example, like the deterrent effect provided by U.S. nuclear-armed submarines in the Pacific against a growing Chinese navy. Other allies like those in the Persian Gulf and Eastern Europe are skeptical about the cuts as well.

Finally, Obama’s nuclear program will empower rogues, terrorists and certain credible nation states like China. They rightly see the U.S. backing down from a robust nuclear program and a credible threat policy. That has kept those with nuclear lusts somewhat contained but Obama’s reliance on diplomacy and sanctions has been interpreted as a weakness.

President Obama’s dream of a “world without nuclear weapons” is unrealistic and costly. He’s right to take steps to deny those weapons to rogues and terrorists but his overall nuclear security agenda is a dangerous fairy tale that endangers our security.