Encouraged by US Slamming Israel, Arabs Riot in Jerusalem

The Palestinian Arabs have been swift to capitalize on the Obama administration's recent harsh denouncements of Israel, organizing riots in Jerusalem as well as in at least one Arab town in Samaria.

For the fifth day running Tuesday, thousands of Israeli police were posted in and around the Old City as clashes broke out that saw 60 Arabs and a number of Israeli officers wounded. 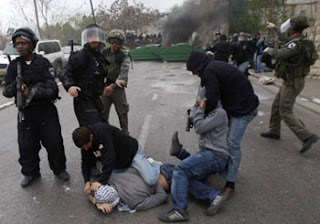 Arabs hurled rocks from behind smokescreens created by burning tires and trash cans, and police responded with rubber bullets and teargas. Tens of Arabs were arrested, some by undercover Israeli police, who moved in to nab primary instigators.

Hundreds of Arabs, including busloads of Bedouin from the Negev responding to inciting calls from their leadership, came to the capital to "rescue" the Al-Aqsa Mosque and Temple Mount from the Jews.

Israeli Arab Knesset Members - who are openly loyal to the "Palestinian Cause" rather than to their own state - were condemned by Jewish lawmakers for encouraging the riots.

According to some analysts, the renewed violence might be just what Washington's land-for-peace-gang had hoped would happen - as it upped the already intense pressure on Israeli Prime Minister Benjamin Netanyahu to agree to make yet more territorial concessions in favor of the "Palestinians."

The unrest began Friday, just hours after the White House and State Department both ripped into Israel, accusing the nation it calls its "friend and ally" of "insulting the United States" and of "undermining the peace process [sic]."

White House Press Secretary Robert Gibbs and President Barack Obama's senior advisor, David Axelrod, both dealt Israel blows in public, as did Secretary of State Hillary Clinton, speaking on CNN. That was after she had given Netanyahu a 45 minute telephone tongue lashing. Obama - who is Netanyahu's political counterpart and as such should have been the one making the call - is believed to have handed the task to his underling in order to "insult" Israel in return.

According to Washington insiders - the Obama administration has not used the harsh language it employed against Israel in its dealing with any other nation - including Iran and North Korea - since coming to power last year.

Hamas - the Islamist "Palestinian" terror group that controls Gaza and is fighting for the hearts and minds of the rest of the Palestinian Arabs - called for Tuesday to be a "day of rage" and instructed its terrorists to launch attacks in the heart of the country.

However Israeli police commissioner David Cohen, who toured the riot hit areas of Jerusalem Tuesday said the outburst was not expected to lead to a "third intifada."

Intifada means "throwing off" of an oppressive force - but in reality the two that have been unleashed - in the late 1980s and beginning again in 2000, are viewed by Israelis as the latest manifestations of the numerous Arab pogroms inflicted on the Jews.

Obama runs out of patience with Israel - The Independent

Netanyahu to Clinton: Israel has proven its commitment to peace - Ha'aretz