The arrest and indictment of top military figures in Turkey last week precipitated potentially the most severe crisis since Atatürk founded the republic in 1923. The weeks ahead will probably indicate whether the country continues its slide toward Islamism or reverts to its traditional secularism. The denouement has major implications for Muslims everywhere.

Turkey's military has long been both the state's most trusted institution and the guarantor of Atatürk's legacy, especially his laicism. Devotion to the founder is not some dry abstraction but a very real and central part of a Turkish officer's life; as journalist Mehmet Ali Birand has documented, cadet-officers hardly go an hour without hearing Atatürk's name invoked. 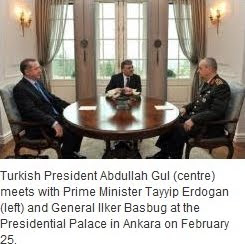 On four occasions between 1960 and 1997, the military intervened to repair a political process gone awry. On the last of these occasions, it forced the Islamist government of Necmettin Erbakan out of power. Chastened by this experience, some of Erbakan's staff re-organized themselves as the more cautious Justice and Development Party (AKP). In Turkey's decisive election of 2002, they surged ahead of discredited and fragmented centrist parties with a plurality of 34 percent of the popular vote.

Parliamentary rules then transformed that plurality into a 66 percent supermajority of assembly seats and a rare case of single-party rule. Not only did the AKP skillfully take advantage of its opportunity to lay the foundations of an Islamic order but no other party or leader emerged to challenge it. As a result, the AKP increased its portion of the vote in the 2007 elections to a resounding 47 percent, with control over 62 percent of parliamentary seats.

Repeated AKP electoral successes encouraged it to drop its earlier caution and to hasten moving the country toward its dream of an Islamic Republic of Turkey. The party placed partisans in the presidency and the judiciary while seizing increased control of the educational, business, media, and other leading institutions. It even challenged the secularists' hold over what Turks call the "deep state" – the non-elected institutions of the intelligence agencies, security services, and the judiciary. Only the military, ultimate arbiter of the country's direction, remained beyond AKP control.

Several factors then prompted the AKP to confront the military: European Union accession demands for civilian control over the military; a 2008 court case that came close to shutting down the AKP; and the growing assertiveness of its Islamist ally, the Fethullah Gülen Movement. An erosion in AKP popularity (from 47 percent in 2007 to 29 percent now) added a sense of urgency to this confrontation, for it points to the end of one-party AKP rule in the next elections.

The AKP devised an elaborate conspiracy theory in 2007, dubbed Ergenekon, to arrest about two hundred AKP critics, including military officers, under accusation of plotting to overthrow the elected government. The military responded passively, so the AKP raised the stakes on Jan. 22 by concocting a second conspiracy theory, this one termed Balyoz ("Sledgehammer") and exclusively directed against the military.

The military denied any illegal activities and the chief of general staff, İlker Başbuğ, warned that "Our patience has a limit." Nonetheless, the government proceeded, starting on Feb. 22, to arrest 67 active and retired military officers, including former heads of the air force and navy. So far, 35 officers have been indicted.

Thus has the AKP thrown down the gauntlet, leaving the military leadership basically with two unattractive options: (1) continue selectively to acquiesce to the AKP and hope that fair elections by 2011 will terminate and reverse this process; or (2) stage a coup d'état, risking voter backlash and increased Islamist electoral strength.

At stake is whether the Ergenekon/Balyoz offensives will succeed in transforming the military from an Atatürkist to a Gülenist institution; or whether the AKP's blatant deceit and over-reaching will spur secularists to find their voice and their confidence. Ultimately the issue concerns whether Shari'a (Islamic law) rules Turkey or the country returns to secularism.

Turkey's Islamic importance suggests that the outcome of this crisis has consequences for Muslims everywhere. AKP domination of the military means Islamists control the umma's most powerful secular institution, proving that, for the moment, they are unstoppable. But if the military retains its independence, Atatürk's vision will remain alive in Turkey and offer Muslims worldwide an alternative to the Islamist juggernaut.