The man who occupies the Oval Office has leaked to the news media that the U.S. is deploying two Patriot missile systems in each of four Islamic countries - Qatar, United Arab Emirates, Bahrain and Kuwait - and is keeping two ships in the Persian Gulf capable of shooting down missiles - Iranian missiles.

These moves are certainly eye openers as this White House has previously abandoned the firm hand posture of the previous administration in deference to diplomacy. In addition, these are major defensive and foreign policy decisions going forward with no "official" announcement. These are the types of steps that shed light on America's role in end time prophecy. 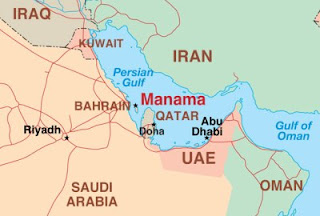 The news media appears lost for an explanation because this Administration has been so determined to engage Iran in talking rather than any action. The sudden and unannounced escalation of missile installations in four Islamic countries, often considered Israeli enemies and American allies, could upset the entire perceived balance of power in the Middle East.

In the past, Iran has reacted to Bush Administration announcements of war games or deployment of battleships in and around the Persian Gulf. This unannounced, sudden and substantial defensive fortification in the area is likely to result in aggressive postures not only by Iran, but also by Iran's allies, Russia and China.

For nearly ten years, the U.S. has accused Iran of building nuclear bombs and the missile system to deliver them. The United Nations International Atomic Energy Agency denied Iran's intentions until recently, giving the terrorist sponsoring nation the needed time to build such weapons. Russia and China have continually blocked any substantial action against Iran from their positions on the U.N. Security Council.

The strategy of arming Islamic enemies of Iran is a doubled edged sword. This is putting a huge amount of firepower in the hands of Islamic rulers whose hatred for Israel runs far deeper than their hatred for their Islamic brothers. Meanwhile, the terrorist group Hezbollah reportedly has 40,000 missiles aimed at Israel.

In Ezekiel 38:16, the Lord says that in the latter days Russia, Persia and all the nations in the region, "shalt come up against my people of Israel like a a cloud to cover the land." Iran's leader, Mahmoud Ahmadinejad, says "Iran will deliver a telling blow to global powers on February 11," - the anniversary of Iran's Islamic revolution. These are the steps that lead to prophecy fulfilled.