The US Is Not the Only Nation with a Debt Problem

For the past few years, I've been regularly reporting on America 's growing national debt load. We are not the only nation spending more than we take in. In fact, there are several countries with a much larger problem with public debt - Greece, Portugal, and Japan are three examples. They all suffered downgrades last week to their credit worthiness.

Greece has an out-of-control budget deficit. It has been in the news concerning whether it may need an emergency loan from fellow EU members to avoid default.

“If you fear a Greek crisis, then you should not only avoid government bonds but corporates as well,” said Philip Gisdakis, head of credit strategy at UniCredit SpA in Munich.

"The outlook change reflects our view that the Japanese government's diminishing economic policy flexibility may lead to a downgrade unless measures can be taken to stem fiscal and deflationary pressures," S&P said in a statement.

Japan shoulders the biggest public debt burden among industrialized countries, and because of the size of the Japanese economy, its debt problem needs the most attention. Greece and Portugal are smaller nations that can be bailed out by an IMF loan.

The size of Japan 's debt is staggering. Economists predict the country's debt will balloon to 190 percent of gross domestic product over the next couple years. To give you a perspective of the size of this finance burden, the U.S. has a national debt that is only at 70 percent of GDP. 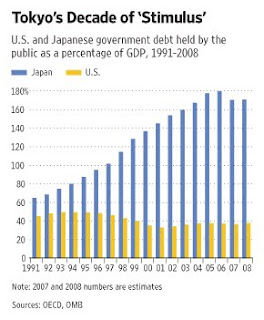 Someone might ask, "What are we worried about?” We could double the size of our debt and still be second to Japan. It's a bit of an "apples-to-oranges" comparison. Japan has been able to run a higher-than-average public debt-to-GDP ratio because it has had such a high personal savings rates. Only 6 percent of its debt is held outside the country. Their borrowing costs are also very low. The yield on ten-year government bonds has been around 1.30 percent this year, and the short-term rates are around a tenth of a percent.

Japan's debt load has that nation in a death grip. The need to service the debt has sucked the life out of the Japanese economy. Nominal GDP has only increased at an annual rate of 0.1 percent since 1991. It is a formula for calamity when a nation's debt is growing and its economy is not.

The Japanese have proven that you can't just spend your way out of financial trouble.. Tokyo tried for twenty years to jump-start the economy, and all they have to show for it is a mountain of debt. Oddly enough, we are going down the same path. Washington has just pumped $2 trillion into our economy, and unemployment continues to rise.

The most likely factor that could trigger a collapse in Japan is their entitlement program. They have a rapidly aging population that will eventually bankrupt their retirement services.

Even if someone found the secret to eternal youth, there is no way for the Bank of Japan to keep rates artificially low forever. The rate on long-term bonds would only need to double to 2 percent to create a situation of total insolvency.

The Bible predicts that some day, a man is going to come and promise to solve much of the world's social, political, and economic problems. To have the whole world turn to the Antichrist for answers seems to imply that a time of chaos will sweep over the planet.