Who is covering for Rashad Hussain? Last Saturday, in a video message to the U.S.-Islamic World Forum in Qatar, Barack Obama appointed Rashad Hussain to be his administration’s special envoy to the Organization of the Islamic Conference (OIC). Rashad Hussain several years ago defended a leader of a jihad terrorist group - and now the record of his doing so has been deep-sixed.

Journalist Patrick Goodenough of CNS News has discovered that in 2004 Hussain denounced the prosecution of University of South Florida professor Sami al-Arian as a “politically motivated persecution” designed “to squash dissent.”

To be sure, this was a widespread view among liberals at the time. Al-Arian himself pushed all the right Leftist buttons: “I’m a minority. I’m an Arab, I’m Palestinian. I’m a Muslim. That’s not a popular thing to be these days. Do I have rights, or don’t I have rights?” The American Association of University Professors defended Al-Arian, as did The Chronicle of Higher Education, which published a cover story called “Blaming the Victim?” and featuring a photo of Al-Arian.

In March 2002 Nicholas Kristof went to bat for the professor in the New York Times:

“The point is not whether one agrees with Professor Al-Arian, a rumpled academic with a salt-and-pepper beard who is harshly critical of Israel (and also of repressive Arab countries) — but who also denounces terrorism, promotes inter-faith services with Jews and Christians, and led students at his Islamic school to a memorial service after 9/11 where they all sang ‘God Bless America.’ No, the larger point is that a university, even a country, becomes sterile when people are too intimidated to say things out of the mainstream.”

Phil Donahue fawned over Al-Arian on his show. “So, one more time, sir,” he said to the professor, “and I know that you’re probably getting tired of these same questions -‘death to Israel’ did not mean you wanted to kill Jews, do I understand your position?” After Al-Arian assured him of his pacifistic intentions, Phil went on to allege that “the law of innocent until proven guilty doesn’t seem to exist for Professor Sami Al-Arian.”

All of Al-Arian’s defenders had egg on their faces when Al-Arian pled guilty to charges involving his acting as a leader of Palestinian Islamic Jihad, a deadly terrorist group that has employed suicide bombings and other terror tactics to murder over one hundred Israelis. 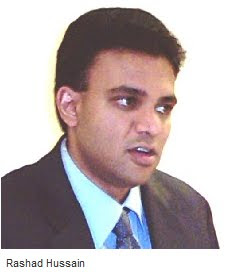 Was this bowdlerization done by someone at the Washington Report acting on his own discretion, or is the Obama camp involved? Is someone in the Administration aware of the political fallout that could result from the news that Obama is sending a man who spoke up on behalf of a convicted jihad terrorist as his envoy to the leading Muslim organization in the world? Did they perform or ask to be performed a bit of Orwellian image enhancement on Rashad Hussain?

Even aside from this there was enough disquieting about the appointment. In a 2007 article Hussain criticized focusing on Muslims in anti-terror efforts:

“Federal law should adopt a standard that protects national security while forbidding the targeting of non-citizens solely on the basis of their racial, religious, or ethnic backgrounds.”

When the overwhelming majority of terror attacks are committed by young Muslim males acting in the name of Islamic teachings, this is just a call for the waste of resources.

And then there is the idea of sending an envoy to the OIC in the first place. This 57-government Islamic bloc, the largest voting bloc in the UN today, is waging an international campaign against the freedom of speech, trying to pressure the West into passing laws criminalizing criticism of Islam – including counterterror investigations of the motives and goals of jihad terrorists. Is this really an organization to which Obama is well-advised to reach out?