Sovereignty and Lives at Stake as Debt Grows

Bad things happen when you don't have enough money to pay your bills. America is facing record home foreclosures, with the federal government predicting that at least three million homes will go into foreclosure this year. The government answer to this problem is to throw more tax payer money at it. The jobless rate is upwards of 20% - this includes unemployment at about 10% and another 10% of those who are unable to find jobs. Again the government answers with taxpayer money. Banks, car companies and investment bankers are in debt by the billions. The government answers with instructing the U.S. Treasury to borrow a record $1.9 trillion. 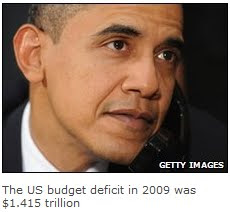 Where will the money come from? It will likely come from Japan and China, which together hold over 42% of U.S. debt. According to CNSNEWS.com, this White House will spend about 25% of the nation's gross domestic product - nearly double the percentage of the GDP that America's top spending president Franklin Delano Roosevelt spent during the great depression. Even federal spending as a percentage of the GDP in World War II is less than what this White House will spend in 2010. In the White House 2010 budget submitted to Congress, the U.S. deficit as a percentage of GDP is estimated at 11%.

To put things in perspective, Greece's government deficit as a percentage of its GDP is about 13%. Greece's government spending has resulted in insolvency. And the European Union Council of Financial Ministers put Greece on notice that it must comply with EU austerity demands by March 16 or lose its sovereignty as a nation. The EU is requiring that Greece reduce its deficit as a percentage of its GDP to thee percent in three years. The UK Telegraph reports that Article 126.9 of the Lisbon Treaty authorizes the EU to seize the sovereignty of Greece because of its insolvency. How much more would America's enemies connive to do the same to the U.S.? And would this group of American leaders even resist?

Revelation 13:7 speaks of the one world order of the end times under the control of the anti-Christ, "And it was given unto him to make war with the saints, and to overcome them: and power was given him over all kindreds, and tongues, and nations." From this verse and the context of the verses around it, the saints resisted the anti-Christ, but he overcame them. A one world united under one leader, with one financial head has absolute power to do whatever he wishes. Allowing leaders to spend and borrow our nation into an insurmountable debt places not only the national security and sovereignty in jeopardy, but also the very lives of the saints who will stand righteously. The prophecy clock is ticking.