Rome Leader Makes "Historic Visit" to Israel: Says His "Greatest Dream" Is for Israel to Join the European Union

On Monday, Israeli Prime Minister Netanyahu welcomed Italian Prime Minister Silvio Berlusconi and the Italian cabinet for a series of joint meetings with the Israeli cabinet. He also hosted a gala dinner for the Italian delegation at the King David Hotel in Jerusalem. Netanyahu described the leader from Rome as “one of Israel’s greatest friends, a courageous leader who is a great champion of freedom and a great supporter of peace.” Netanyahu said this despite the fact that the Associated Press reports Italy is the leading trading partner with Iran in the E.U. 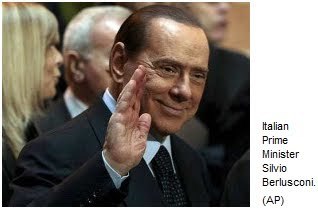 Berlusconi was one of only three leaders in Western Europe who voted against the anti-Israel U.N. resolution last fall regarding the Goldstone Commission Report (the other two were German Chancellor Angela Merkel and Netherlands Prime Minister Jan Peter Balkenende).

“I can think of very few nations who have made such a contribution to Western culture as our two nations. In Rome and Jerusalem, the foundations for Western culture were laid,” Netanyahu said Monday night.

Berlusconi, who brought eight senior members of his government, returned the compliment saying that Rome considers Jerusalem one of its closest allies and considers Israel a part of Europe. “As long as I am one of the shapers of politics,” the Roman leader stated, “my greatest dream is to include Israel among the European Union countries.” He invited Netanyahu to come to Italy for another round of meetings.

The meetings were described by some in the media as “historic.” They also had echoes of Bible prophecy. The Hebrew Prophet Daniel indicates that in the “last days” Israel will sign a peace treaty with her many neighbors that appears to be brokered or negotiated or confirmed in some way by a leader from Rome (see Daniel chapter nine). It’s too soon to say definitively that yesterday’s events were in any way part of those prophecies, but they were certainly intriguing to those tracking geopolitical events in light of End Times prophecies.