The man who occupies the Oval Office is telling the American people that government needs to freeze its spending and quit borrowing money. On February 1, he gave a speech at the White House about his new budget that he is submitting for Congressional approval. He said,

"But we can't simply move beyond this crisis; we have to address the irresponsibility that led to it. And that includes the failure to rein in spending, as well a reliance on borrowing - from Wall Street to Washington to Main Street - to fuel our growth. That's what we have to change. We have to do what families across America are doing: Save where we can so that we can afford what we need... 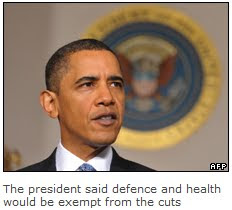 "I've proposed a freeze in government spending for three years. This won't apply to the benefits folks get through Social Security, Medicaid, or Medicare. And it won't apply to our national security - including benefits for veterans. But it will apply to all other discretionary government programs. And we're not simply photocopying last year's budget; freezing spending does not mean we won't cut what doesn't work to pay for what does."

Now from the very words of his mouth, any American would understand that the government is no longer doing business as usual - that the out of control spending, the socialist tenets of this administration are at an end. He has heard the people loud and clear and is submitting to their will.

Not so fast. His budget freeze, according to AP, will only account for about one percent of government spending. But that's not the least of the deception. AP reports that this budget submitted by the White House is a record $3.8 trillion, "that would boost the deficit beyond any in the nation's history while only slowly beginning to put Americans back to work." According to estimates, the budget will deepen the budget deficit to $1.56 trillion and unemployment will remain around 10 percent. Every American citizen's portion of this budget proposal is over $11,000. A family of four, for example, will owe the government over $44,000 for this year's budget, and then another $18,800 on top of that for the deficit.

"But evil men and impostors shall wax worse and worse deceiving and being deceived."

In this case, actions speak louder than words. These evildoers say they are acting responsibly with your hard earned tax dollars, but they are doing the opposite. And they are doing it to enslave you. You have a voice. You know the truth. Righteousness exalts a nation. Stand in Christ's righteousness. And having done all, stand.