TEL AVIV – Despite announcements to the contrary, Russia still plans to deliver its S-300 advanced air-defense missiles to Iran, according to a senior Egyptian security official speaking to WND.

The official said Russia also intends to see the system delivered to Syria, from which it can also be transferred to the Hezbollah militia operating in Lebanon.

Earlier this week, Prime Minister Benjamin Netanyahu visited Moscow, where he reportedly asked the Russians to cancel a contract with Iran to deliver and install the S-300 system. Israeli newspapers quoted sources in Netanyahu's entourage stating Russia agreed to cancel the sale. 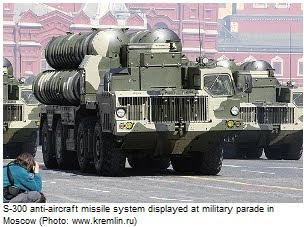 The S-300PMU1 is a mobile system designed to shoot down aircraft and cruise missiles. Analysts say the S-300 system would make any Israeli strike against Iran's nuclear facilities more difficult.

Just after Netanyahu's visit, the Interfax news agency quoted a senior Russian official as saying the delivery to Iran of the S-300 has been delayed for technical reasons.

"The delay is due to technical problems. The delivery will be carried out when they are resolved," said Alexander Fomin, deputy head of Russia's Federal Service for Military-Technical Cooperation.

An Israeli security official said Israel is monitoring the situation.

Russia has not announced the specific terms of its agreement with Iran, but Interfax reported the deal calls for Moscow to sell Tehran five batteries of S-300PMU1 missiles for around $800 million.

Iran has expressed frustration over the continued delay in the delivery of the S-300 system. Last week a top Iranian military commander claimed his country would build its own air-defense missiles that would be even better than the S-300.