An interesting development, although at cursory glance seems of little importance, brings thoughts of what might come to be. Even the most innocuous of events in these times of stage-setting for fulfillment of Bible prophecy in the Middle East warrant a closer look.

When a Saudi prince says that sanctions on a feared fellow Islamic state enemy, Iran, aren't working, so something stronger should be done, the declaration makes one wonder why this statement is made for public consumption. Iran is indeed Saudi's enemy. Many within Islam have long wanted the Saudi royal family dethroned and replaced with their own dictatorships. Iran is the strongest of the Islamic states, both in military strength and in desire to dominate that Middle Eastern world. Fulfilling such Iranian desires would necessitate the overthrow of Saudi royalty, so the Saudis are taking notice. Those facts alone should stand by themselves to point to the dangers presented by Mideast volatility.

However, being observers of these things from the perspective of Bible prophecy, we look deeper to find meanings. This is especially important to do since so many stage-setting issues and events now line up on the biblically prophetic horizon. 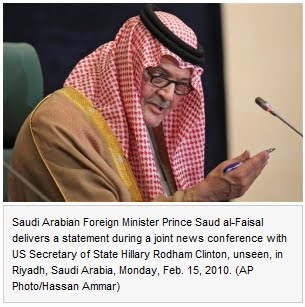 Therefore it was with observer's antenna raised that I homed in with fascination upon the few words of one of the Saudi spokesmen in a news item. The report said that the spokesman for Saudi Arabia expressed doubt that further sanctions against the Iranian regime's determination to continue with its nuclear development program would do any good.

Now, we might expect an Islamic brother to say this on behalf of another Islamic brother. All Islamic states - as history has proven - so hate Israel that they would want the Western powers to back off of imposing sanctions that bring pressure to bear upon fellow Israel haters.

At first glance, this statement seems designed to alleviate such pressure on the Iranians. But, the Saudi spokesman wants to forget the sanctions so that greater, not lesser, pressure be brought to bear on Iran and its developing nuclear threat. Not only does he want greater pressure, but pressure of the more immediate sort.

Prince Saud al-Faisal told a news conference in the Saudi capital that the threat posed by Iran's nuclear ambitions demands a more immediate solution than sanctions. He described sanctions as a long-term solution, and he said the threat is more pressing. (Robert Burns, "Saudi Official Questions New Sanctions on Iran," AP, 2/16/10).

The Saudi foreign minister spoke this past Monday in a joint appearance with U.S. Secretary of State Hillary Rodham Clinton.

"Sanctions are a long-term solution," al-Faisal said. Then, speaking of Iran and it's nuclear program, he said, "But we see the issue in the shorter term because we are closer to the threat." He said further, "We need immediate resolution rather than gradual resolution."

The news story came to the conclusion that the U.S. delegation who shared the press conference with al-Faisal were confused by the Saudi minister's words. U.S. officials traveling with Clinton said privately they were uncertain what al-Faisal meant, since the Saudi government has been explicit in its support of sanctions against Iran. They said he appeared to be suggesting that sanctions may not be effective and that other action could be required. (Ibid.)

It seems to me that Saudi royalty genuinely does fear the likes of Iranian dictator Mahmoud Ahmadinejad and the ruling clerics of that bibically prophetic Persian nation. One should not believe for a moment, however, that Secretary Clinton and the U.S. delegation is confused as to what the Saudi Kingdom's spokesman means with regard to wanting to move beyond sanctions that aren't working and straight to stronger actions.

The story gave a clue as to what is really meant behind all of the Saudi's words of concern. This is what my antenna homed in on--in a brief, obscure part of the story:

"The Saudi minister also said efforts supported by the U.S. to rid the Middle East of nuclear weapons must apply to Israel" (Ibid.)

All of Islam, especially militant Islam, hates Israel and its presence in that land - more than they fear each other. And this is where my paranoia, as detractors of my opinion might call it (but better put, my cynicism), leaps to the forefront of analyzing this almost-hidden mention that al-Faisal wants Israel's nuclear capability neutered.

Make no mistake. All the Islamic states of the region would climb on board Israel's being forced or cajoled into surrendering its suspected nuclear capability. The very hint by America's number-one Islamic ally in the region, suggesting that Israel be forced to give up its nukes, is significant, in my view. Such an ingredient will almost assuredly one day be part of a centerpiece of making the false, deadly peace of Isaiah 28:15 and 18 and Daniel 9:26-27.

Israel will at some point become a people at rest, apparently trusting and depending upon others rather than the IDF (Israeli Defense Force) to protect the nation. Certainly, they won't be trusting God to defend them. At such a time, the Gog-Magog coalition will attack full force. Look for there to be ever-increasing calls for a nuclear-free Middle East region, as part of stage setting for Ezekiel 38-39 to be fulfilled.

Editors of Arab Dailies Assess: A War between Iran and the West Is Imminent - Middle East Media Research Institute

Israel and Iran Beef Up Their Arsenals - The Media Linespan