Is Iran Forcing a Showdown in the Middle East?

Well, what will be happening on February 11? A report released this week had the U.S. media abuzz with speculation after the state-run Press TV quoted Iranian President Mahmoud Ahmadinejad on Sunday as saying that the nation will deliver a harsh blow to “global arrogance” on February 11.

No details on or explanation of the statement were revealed, just a grim warning issued from Iran’s leader, Ahmadinejad. 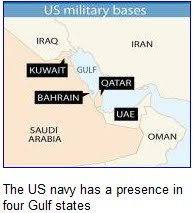 Washington wasted no time issuing a response. This week, it was announced that the United States has expanded land and sea-based missile defense systems in and around the Gulf to counter what it sees as Iran’s growing missile threat. The deployments include 8 Patriot defensive missile installations in Kuwait, Qatar, UAE and Bahrain, as well as Navy ships with missile defense systems capable of shooting down Iranian missiles within striking distance in and around the Mediterranean.

These Patriot missiles, by the way, are designed to intercept enemy missiles before they reach their target.

Washington is also helping Saudi Arabia to create a 30,000-strong force to protect oil installations and other infrastructure

The moves were not announced officially by Washington, but instead were leaked to the press and are said to be motivated by America’s attempt to deter an Iranian attack on American allies in the Gulf. It also sought to reassure the Gulf States that the the U.S. would protect their allies from any Iranian retaliation.

Underlying all of this tension between the West and Iran has been the West’s attempts to gain access to Iran’s nuclear installations. Iran has said that its purpose of producing nuclear energy is for its nation’s electricity needs. The West has argued that Iran wants to use its nuclear capabilities for hostile purposes. Since Pres. Obama has entered the White House, he has taken a decidedly diplomatic approach to dealing with Iran. This is a contrast to the confrontational approach used by his predecessor, Pres. George W. Bush.

Now, the confrontation between the U.S. and Iran appears to be escalating. Pres. Obama is now seeking to impose sanctions on Iran, and specifically on Iran’s Revolutionary Guard, who is believed to be in charge of Iran’s atomic program.

One of the concerns in the region is that some of the Gulf states feel threatened by Iran’s nuclear abilities and many are beginning to feel the need to seek nuclear capabilities themselves. Israel is the only country in the Middle East to already have atomic bombs, although it does not officially acknowledge it. The U.S. is basically attempting to play the role of policeman in the Middle East by protecting non-nuclear Gulf states from Iran.

And it is obviously in America’s best interests to police the area as 62% of the world’s oil supplies lie in this region.

And recent developments indicate that the anti-Iran movement appears to be gaining steam globally.

Meanwhile, China and Russia are still pressing for a diplomatic solution.

And consider the UAE: In the past two years, Abu Dhabi has bought $17billion worth of weapons from the US, including the Patriot anti-missile batteries and an advanced anti-missile system. UAE recently bought 80 US-made fighter jets. It is also buying fighters from France. Petraeus said in a speech in Bahrain last year the UAE air force “could take out the entire Iranian air force, I believe”.

But Iran’s military technology has been advancing as of late too, however. Just this week, Iran test-fired a new satellite rocket and unveiled a series of what it said were home-grown advances in a space program that has worried Western officials because of possible cross-over applications in the country’s weapons program.

The test firing comes as the Islamic Republic celebrates its 31st anniversary. Commemorations began earlier this week and culminate on Feb. 11, the day in 1979 that the shah’s forces capitulated during the Iranian revolution.

So what does Ahmadinejad’s warning about Feb. 11 mean? I expect that there will be mass demonstrations and protests in the streets. I also believe it is possible that we will see an unveiling of some new weapons technology. For example, during the same commemoration period last year, Iran launched its first domestically made and propelled satellite.

But the wild card here is China. China has been firmly siding with Iran in the midst of the West’s growing frustration. In effect, they have been impeding efforts to stop Iran in its tracks of producing nuclear technology. The timing of this comes just as U.S.-Chinese relations appear to be reaching new lows.

Time will tell, but China’s decision will undoubtedly play a major role in how events in the Middle East unfold.

China ramps up tone in disputes with US - Channel NewsAsia

Bankruptcy of Our Nation: 12 Key Strategies for Protecting Your Finances in These Uncertain Times - Jerry Robinson (Book)