Close the Gates – Save Our Military

Trying to keep track of the disastrous decisions coming out of the Obama administration is very similar to watching the federal spending "dollars by the second" ticker. It leaves one dizzy. Defense Secretary Robert Gates and Joint Chiefs of Staff Chairman Adm. Mike Mullen are the latest to shed any core principles and bow to the ungodly assault on everything good and decent in our nation by this president. 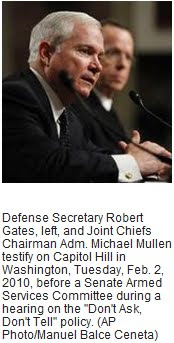 The egregious announcement by Gates, supported by Mullen, that "don't ask, don't tell" will be repealed is no surprise, as it is fulfillment of Obama's campaign promise to the GLBTQIA movement in general and the Human Rights Campaign in particular:

"I will end 'don't ask, don't tell,'" Obama said to a standing ovation from the crowd of about 3,000 at the annual dinner of the Human Rights Campaign, a gay civil rights advocacy group.

If this brass had any brass they would have resigned rather than have a hand in torpedoing the institution they are charged with leading and serving – and therefore our very national security. The stealth attack of moral relativism, feminism, multiculturalism, etc., that have been allowed to creep into our military like the poisonous cloud of chemical weapons is only exacerbated by forcing – and I mean forcing – sexual diversity in the face of our men and women in uniform.

I am not even going to pretend to be objective, as I have had a deep respect for our military all my life with a grandfather who served in the army in World War II, a father who served in the Navy post-Korean War, a father-in-law who was one of the Chosen Few of the First Marine Division in Korea and a son who is active-duty in the Marine Corps with two tours in Iraq under his belt.

WARNING: As we say in Texas, I'm fixin' to be offensive to some who think Christians should be wimpy, quiet saints 24/7.

I am one angry military dad who is mad as hell that the political agenda of a radical and tiny minority being force fed to the people of this country is more important than the cohesiveness, morale, effectiveness and ultimately the safety of those serving us in harm's way.

The Veterans of Foreign Wars was right on the mark in their resolution stating, in part, "Now is not the time to engage in a social experiment that can disrupt and potentially have serious impact on the conduct of forces engaged in combat."

Removing the weakened restraint of don't ask, don't tell will release GLBTQIA activists onto our soldiers like hound dogs of hell as they use their "victim" tactics to intimidate their way to full normalization at every level of every service. The foundational issue at hand is not whether an individual homosexual soldier may or may not carry out his or her duties efficiently, effectively and even with valor. It is about morals, morale and military readiness.

The foundation of the ban on homosexual behavior in the military is directly linked to the Judeo-Christian principles that have been the foundation of Western civilization. Historian David Barton cites "Blackstone's Commentaries on the Laws of England" in asserting that under general civil law, homosexuality or other deviant sex acts are:

A crime which ought to be strictly and impartially proved and then as strictly and impartially punished. ... I will not act so disagreeable part to my readers as well as myself as to dwell any longer upon a subject the very mention of which is a disgrace to human nature [sodomy]. It will be more eligible to imitate in this respect the delicacy of our English law which treats it in its very indictments as a crime not fit to be named; "peccatum illud horribile, inter christianos non nominandum" (that horrible crime not to be named among Christians).

Because they, like thousands of years of their and our ancestors, considered this act fundamentally immoral, Barton also relates a directive of the Continental Congress:

The Commanders of ... the 13 United Colonies are strictly required to show in themselves a good example of honor and virtue to their officers and men and to be very vigilant in inspecting the behavior of all such as are under them, and to discountenance and suppress all dissolute, immoral, and disorderly practices, and also such as are contrary to the rules of discipline and obedience, and to correct those who are guilty of the same.

What we now have are top military leadership who are so diluted by political correctness that we give Muslim radicals free reign, prosecute Marines and SEALs for doing their job, suppress religious expression – if it happens to be Christian – and now give destructive sexual behavior a promotion.

For those who don't like my premise – argue with God, not me. He created us and set the standard, not us "bigots" who love Him and people enough to stand on His truth:

They exchanged the truth of God for a lie, and worshiped and served created things rather than the Creator – who is forever praised. Amen. Because of this, God gave them over to shameful lusts. Even their women exchanged natural relations for unnatural ones. In the same way the men also abandoned natural relations with women and were inflamed with lust for one another. Men committed indecent acts with other men, and received in themselves the due penalty for their perversion. (Romans 1:25-27)

The irresponsibility of this president and Bush holdovers Gates and Mullen is appalling, and as far as I am concerned, treasonous. I ask every military parent, pastor and patriotic citizen in America to join me in calling on Congress and the White House to at least do no further harm and leave don't ask, don't tell – and our brave soldiers, sailors, airmen and Marines – alone.