After the Lord God destroyed the earth with the great flood, He said in His heart as recorded in Genesis 8:21, 22 "I will not again curse the ground any more for man's sake; for the imagination of man's heart is evil from his youth; neither will I again smite any more every thing living, as I have done. While the earth remains, seedtime and harvest, and cold and heat, and summer and winter, and day and night shall not cease." This is a promise from God that he will not again destroy the earth as in the days of Noah. And the Lord outlines what He will not do. He says that while the earth remains cold and heat shall not cease.

The latter days, Jesus Christ says, will be times of deception. He warns in Matthew 24:4, "Take heed that no man deceive you." He warns four times in this chapter to not be deceived. He warns against man deceiving, against false christs deceiving, against those coming in His name deceiving, and against false prophets deceiving. In verse 24:11 Jesus says, "And many false prophets shall rise, and shall deceive many." This means that deception can come from many different areas of human society - from men in general; from those claiming to be the Christ; from those in the church coming in the name of Christ and from false prophets. False prophets likely can be either those in the church or those who are secular. 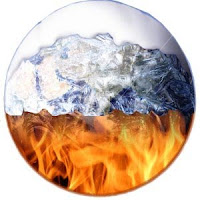 Now the headline is blast like hot air around the globe from the world's most prestigious and highly regarded research center on global warming and climate change - the University of East Anglia's Climatic Research Unit - that there has been no global warming since 1995. Indeed, the men in charge of the scientific studies on global warming and climate change are now admitting that they falsified data, made it up, and once exposed, tried to destroy the so-called scientific research. These "scientists" now have been accused of "scientific fraud." In fact, the disgraced professor who headed up the global warming research, Phil Jones, now says that it may have been warmer in medieval times than today.

So what of Al Gore, who has made millions on global warming fraud? Or of the man who occupies the Oval Office who said in his State of the Union message "I know there are those who disagree with the overwhelming scientific evidence on climate change. But here's the thing - even if you doubt the evidence, providing incentives for energy efficiency and clean energy are the right thing to do for our future"? The politicians want a global society and that was at the political bottom of global warming. But the Bible has the answers, just as it had told us that God would not destroy the earth by cold or heat, 2 Timothy 3:13 says, "But evil men and seducers shall wax worse and worse, deceiving and being deceived."