Jesus said in His Olivet Discourse, as recorded in the Gospel according to Luke: "And there shall be...upon the earth distress of nations, with perplexity" (Luke 21:25b).

Moving forward deeper into 2010, it becomes increasingly obvious that peace in the Middle East is foremost on the minds of the leaders of the major world powers. Distress over the possibility, even the probability, that nuclear conflict might eventuate in the region causes perplexity of the most portentous sort.

Absence of peace in the world, and particularly in the region surrounding modern Israel, creates at this late moment in the fleeting age a vacuum into which the prophesied end-of-days leader will one day vault to power. Antichrist will climb a platform of peace upon which to launch his most terrible campaign of conquest. We get some idea of this supernaturally imbued man's spectacular rise and reign through the Old Testament prophet Daniel:

And in the latter time of their kingdom, when the transgressors are come to the full, a king of fierce countenance, and understanding dark sentences, shall stand up. And his power shall be mighty, but not by his own power: and he shall destroy wonderfully, and shall prosper, and practice, and shall destroy the mighty and the holy people. And through his policy also he shall cause craft to prosper in his hand; and he shall magnify himself in his heart, and by peace shall destroy many." (Daniel 8:23-25b)

It is a strange, deadly peace that is prophesied to serve as launching pad for the beast, as he is termed in Revelation chapter 13. Paul, the apostle and prophet, gave dire warning about that esoteric peace that will pervade in the days approaching the time of the end:

"For when they shall say, Peace and safety; then sudden destruction cometh upon them, as travail upon a woman with child; and they shall not escape" (1 Thessalonians 5:3).

Paul foretold that this murderous peace will come immediately following the "thief in the night" break-in upon an unsuspecting world of earth's inhabitants. (Read 1 Thessalonians 5:1-7.) This refers to the resurrection and translation of the saints of the Age of Grace - the Rapture. The apostle, as he did in speaking of the rapture in 1 Corinthians 15:51-55 and 1 Thessalonians 4:13-18, used personal pronouns to indicate exactly the people about whom he was prophesying. Concerning those alive at that future time, Paul used "we," "us," and "our" to indicate Church Age saints and "they," "them," and "those" to indicate the lost - the unbelievers - who will be left behind when the stupendous event - the Rapture - takes place.

There will be a cry for peace and safety leading up to this time of world-rending intervention by Christ, and an even more urgent demand for peace and safety following that calamitous event. I infer from my study in the matter that the left-behind people who "say peace and safety" seem to be saying also that "now we have peace and safety." I'm convinced that this is the peace of Daniel 8:25 perpetrated upon planet earth by the king of fierce countenance, who will by peace destroy many.

Today, leaders of the planet's most powerful governments consistently fret over the boiling pot the so-called Holy Land presents in threatening to again bring the nations into world war. Other potential conflicts, like that presented by the exchange of fire between North and South Korean forces the past week, are cause for concern. But it is the building potential for all-out war between Israel and its Islamic antagonists that has the premiere diplomatic powers-that-be in "distress" and "perplexity." 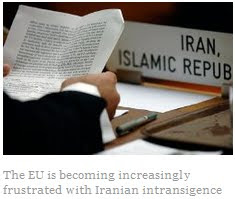 Particularly, it is the building potential violence between the Jewish state and a soon-to-be nuclear Iran that brings forth the cry for peace and safety. European Union (EU) leaders, for example, are frustrated over the peace that eludes all efforts, finding Iran's leadership exasperating.

European Union foreign ministers on Monday (25 January) left a Brussels meeting without a clear picture as to what should be the bloc's next move regarding Iranian non-compliance with international demands regarding its nuclear programme...

The EU is becoming increasingly frustrated with Iranian intransigence... "We have been in talks for six years," [France's Europe minister, Pierre Lellouche, said] adding: "All the West's proposals have been rejected."

Mr Lellouche warned that Iran's enrichment of uranium was now at the "threshold of militarisation." The Security Council permanent five - China, France, Russia, the UK, and the US - and Germany have already met once in 2010 to consider further sanctions, but without reaching agreement....

World powers are concerned at the possibility that Iran's nuclear energy programme is secretly aimed at developing weapons in violation of the Non-Proliferation Treaty. (Leigh Phillips, "EU Unclear about Next Move on Iran," EUobserver.com, Headline News, 1/26/10).

EU leadership, as well as all other leaderships, have solid ground for concern that the volatility could boil over at any time and ignite conflagration in the region. Iran's supreme leader, Ayatollah Ali Khamenei, declared this week that Islamic nations will one day watch the destruction of its most hated enemy, Israel. He is quoted on his website Wednesday as saying:

"Surely, the day will come when the nations of the region will witness the destruction of the Zionist regime...when the destruction happens will depend on how the Islamic nations approach the issue."

Concerns about Iran's nuclear development and the nations' diplomatic elite's frustration over not knowing what to do about the threat might remind the student of Bible prophecy of another predicted situation. The current angst over Iran's threat evokes thoughts of an apparent note of diplomatic protest that will be issued during a future Iranian (Persian) military action against Israel.

Sheba, and Dedan, and the merchants of Tarshish, with all the young lions thereof, shall say unto thee, Art thou come to take a spoil? Hast thou gathered thy company to take a prey? To carry away silver and gold, to take away cattle and goods, to take a great spoil? (Ezekiel 38:13)

The powers of the West, and even Saudi and others in the Middle East, will send a weak note of diplomatic protest. There will still, apparently, be an inability to deal with the Iranian (and the accompanying coalition of nations') threat to world peace. The indecisiveness and the cry for peace and safety will ultimately bring the beast to power. He will have the answers to foment the deadly peace people want. It will be such peace that will serve as Antichrist's launching pad to absolute power.

Is Barack Obama the antichrist? - GotQuestions.org