In the same week, Britt Hume of Fox News had the audacity to evoke the name of Jesus Christ as a means of restoration for Tiger Woods and Pastor Joel Osteen evoked His name in blessing an activist lesbian as she was inaugurated as mayor of his city and while C-Span broadcast it nationwide. The first is being vilified, the second adored.

Are they both talking about the same Jesus? Does Jesus both restore sinners and bless sin? My Bible says very clearly that the first is central to His coming and the second is utterly incompatible. 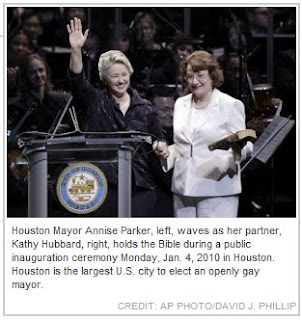 … We ask that everything we do would bring honor to you … and we just lift up especially Mayor Annise Parker. … Lord, we thank you just for raising her up and just for your goodness, your mercy in her life, and just for supernatural wisdom, Father. We honor her today and our other officials, and Lord, we count it a joy and honor to be here in your presence with all of our friends and we just thank you for this day. In Jesus name, amen.

We are certainly to pray for those in authority as per the God's instructions through the Apostle Paul to Timothy (1 Tim. 1:1-6):

First of all, then, I urge that entreaties and prayers, petitions and thanksgivings, be made on behalf of all men, for kings and all who are in authority , so that we may lead a tranquil and quiet life in all godliness and dignity . This is good and acceptable in the sight of God our Savior, who desires all men to be saved and to come to the knowledge of the truth. For there is one God, and one mediator also between God and men, the man Christ Jesus, who gave Himself as a ransom for all, the testimony given at the proper time.

Every pastor I have heard from agrees Joel crossed the line in declaring that God "raised up" a mayor who denies Him, mocks him through her life and represents a complete perversion of His creation and created order – then thanking Him for doing so. Did God raise up Barack Hussein Obama, Nancy Pelosi, Harry Reid, etc. as well? Proverbs 16:4 tells us that God makes even the wicked for the "day of evil." Commentator Matthew Henry stated:

He makes some use even of wicked men, as of other things, to be his sword, his hand (Psalm 17:13, 14), flagellum Dei – the scourge of God. ("Matthew Henry Unabridged")

I don't think, by the way, this context is what Joel had in mind during his prayer.

It is an important question, because as in all things we must look past surface symptoms to root causes, whether a lesion on the skin that is an external sign of internal cancer or wicked rulers that are political indicators of cancer of the soul among the people.

Toward the political side of the question, pastors and all citizens must ask and answer the following questions: If the answer to the first three questions is "yes" – and it is – then Joel was profoundly wrong again on a serious biblical issue. We cannot blame God for our own disobedience in choosing governing leaders for selfish, self-serving and immoral or amoral reasons. We cannot blame God for the corrupt condition of our moral order, because Britt Hume was right – all we have to do is turn to Jesus Christ for forgiveness and redemption personally and collectively.

There is a big "if" in the equation of both, however, as there is with all of God's promises. For those who love to quote Jesus partially when he exposed hypocrisy among the accusers of the woman "caught" in adultery by saying, "Neither do I condemn you," they usually conveniently forget the rest of the sentence. In full it is, "Neither do I condemn you; go and sin no more."

The name of Jesus Christ is "explosive" and "all hell breaks loose" when uttered reverently on national news, as Britt Hume stated, because either He as God the Son came to "seek and to save that which was lost" and is Lord, or he was a lunatic or liar. His Name is the center of the battle today because if He is the former, sin exists and He is our Redeemer.

If He is the latter, we are indeed as the Apostle Paul described, "of all men to be most pitied" – or reviled. As for me, I worship, serve and follow a Jesus Christ who can redeem abject sinners like me, Tiger Woods and Annise Parker, but who cannot and does not bless our sin.

What Obama Could Learn from Brit Hume - Town Hall

Thinking Biblically About Homosexuality - Grace to You (John MacArthur)