Greetings from Israel. I’m here for a time of prayer and planning with some of our Joshua Fund team. Three big stories in the news since I’ve hit the ground, all involving preparations for a possible massive war between Israel, Iran and her Radical Islamic allies:

Israel to simulate biological warfare attack - “An exercise simulating a response to a biological warfare attack will be carried out in the Dan region next week. The exercise, which will be the largest of its kind in Israel’s history, will be carried out in Tel Aviv, Ramat Gan, and Holon and aims to evaluate the ability of the Home Front, the medical services, rescue teams and the municipal authorities to respond in the conditions created by a biological catastrophe caused either by terrorists or by accident. The exercise, code named Orange Flame, will be held on Wednesday and Thursday next week, and rescue units of the Home Front Command and special detection units of the Health Ministry, will be tasked to locate the biological hazard and deal with hundreds of citizens who were hypothetically exposed to the substance.” 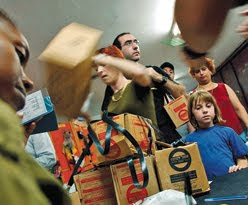 IDF to blanket Israel with gas masks - “The Home Front Command is planning to begin distribution of individual protection kits, i.e. gas masks, to every citizen starting in late February, according to a cabinet decision taken last week. Originally, just over 60 percent of the population were to receive kits, but a decision to extend that protection to the whole country means the production of the necessary equipment has been stepped-up, and another billion shekels is needed to fund to the endeavor. The plan is to distribute protective kits to each of the nearly eight million citizens (in line with a population estimate for 2013), over a period of three years.”

Tehran Plans a Major Military Exercise: Drill to Boost 'Defensive Capabilities' Coincides With Deadline Iran Has Set for West on Nuclear Offer – “Iranian media on Sunday reported Tehran will conduct a large-scale defensive military exercise next month, coinciding with what government officials now say is a deadline for the West to respond to its counteroffer to a nuclear-fuel deal.”