Of Righteousness, Racism and Harry Reid

Republican National Committee Chairman Michael Steele is calling on Nevada Democrat and Senate Majority Leader Harry Reid to resign. Steele says that Reid made racist comments about the man who occupies the Oval Office (OOO). Reid apparently has admitted to saying that the former senator from Illinois was "light skinned" and speaks "with no Negro dialect, unless he wanted to have one" during the 2008 campaign. Reid reportedly phoned OOO to apologize and was left off the hook. OOO said "I've seen the passionate leadership he's shown on issues of social justice and I know what's in his heart. As far as I am concerned the book is closed." 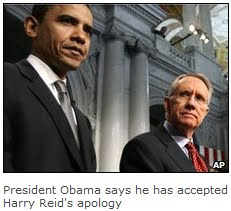 Well, not so fast, says Steele, who recalls the news media skewering of Mississippi Republican Senate Majority Leader Trent Lott, who was driven out of his leadership position in 2002 for comments he made at a Strom Thurmond benefit about a 1948 Presidential campaign. In trying to be gracious to the retiring Thurmond, Lott said that the problems of the day would have been solved if Thurmond would have been elected president when he ran in 1948. Thurmond, however, was a segregationist at the time running under a Democratic Party offshoot called the Dixicrat Party. Lott apologized for his "poor choice of words," but Lott was hounded until he resigned.

The December 12, 2002 issue of the Chicago Defender quoted then State Senator Obama as saying,

"It seems to be that we can forgive a 100-year-old senator for some of the indiscretion of his youth, but, what is more difficult to forgive is the current president of the US Senate (Lott) suggesting we had been better off if we had followed a segregationist path in this country after all of the battles and fights for civil rights and all the work that we still have to do...The Republican Party itself has to drive out Trent Lott. If they have to stand for something, they have to stand up and say this is not the person we want representing our party."

There is no shortage of hypocrisy in politics, but it is amazing how forgiving some people can be when they are on the same side of the political fence as the offender. Reid should resign - not just over a caddy remark he made in private, but rather over his reckless disregard for the Constitution; his support of special rights for homosexuals, yet no rights for the life of the unborn; his treasonous remarks over the US losing the war in Iraq; and his support for socialist programs.

"Righteousness exalts a nation, but sin is a reproach to all people."

With some 52 percent of Nevada voters now having an unfavorable opinion of Reid, perhaps they will this year reward Reid for his deeds.

Republican Chairman Calls for Reid to Step Down - Bloomberg

Culture of Corruption: Obama and His Team of Tax Cheats, Crooks, and Cronies - Michelle Malkin (Book)