Everyone recognizes that the United States of America is now the world's only superpower. Its economy is the engine that drives the world. Even in our difficult times, it is still the cornerstone on which the global economy rests.

Twice in one century, the United States saved Europe, and the rest of the world from the domination of tyrants. Later, America drove the Soviet Empire into the ground and, in so doing, secured freedom for untold millions of citizens and scores of nations.

No matter your politics or what label you attach to your beliefs, it is undeniable that, to this day, America remains the last, best hope of the world's oppressed. 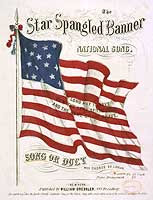 Yet the United States of America exists in the shadow of an uncertainty. Have you ever thought about the fact that even our National Anthem acknowledges that it is possible to forfeit or lose the magnificent heritage that is the United States of America? When Francis Scott Key penned the words to The Star Spangled Banner, he ended the first verse (which is the one customarily performed as our nation's official anthem) with a question:

"O' say does that star spangled banner yet wave o'er the land of the free and the home of the brave?"

Whether he was being prophetic or simply poetic is not important. His inclusion of that question rightly implies that America's great freedom and promise cannot be taken for granted. It came into existence through the great courage and sacrifice of our forebears. It can fade from existence through the antipathy and apathy of its current citizens.

That's why so many of our Founding Fathers found it imperative to insist that the form of government they established can only prosper if the citizenry is predominantly Judeo-Christian. They minced no words when they proclaimed that our democracy can only succeed if it remains founded on the principles of Christianity and respectful of its Judeo-Christian principles.

Yet, today as no time in our history, those very principles are under ferocious attack. It's as if major elements of society have hoisted their axes, determined to chop away at the roots of our democracy until the magnificent tree of American freedom shivers and falls.

That's why there is no time to lose. As Christians and patriots, we must seek God's mercy for our faltering nation. The forces of darkness have succeeded in marshaling their greatest assault yet. And the speed with which recent changes and events have weakened the basic foundations of our society is nothing compared to what we may see in the coming months. If we are to see our nation saved, we must earnestly call out to God, repent of our sins as a nation, and humble ourselves before Him.

There's no better time to begin that renewal than at the dawning of the new year, 2010.

Thank you for your faithful support of "The Hal Lindsey Report" during 2009. Have a "Happy New Year!" May God's richest blessings be yours. And may God continue to bless our beloved America.

Should a Christian be patriotic? - GotQuestions.org

You Might Be A Constitutionalist If... - Chuck Baldwin Live

Why we must support Israel - NJ.com (George Berkin)