Is there any truth to the claim that the world will end in 2012?

There is not a single academic Mayan scholar who has endorsed the idea that the conclusion of the fifth cycle of the Mayan Long Calendar will signal the end of the world. In fact, they have mocked the idea as nothing more than an Internet urban legend.

Dr. Sandra Noble, the director of the Foundation for the Advancement of Mesoamerican Studies, has pointed out that there is no declaration in Mayan literature that the end of the world will occur when the Long Calendar ends its fifth cycle. On the contrary, she says its conclusion would most likely have marked a time of celebration for the Mayas and the launching of another five cycles of the calendar.14

Keep in mind too that the Long Calendar has been interpreted in various ways by the scholars. Some have deciphered its ending date to be anywhere between December 21 to December 27 in 2012. But others have calculated the end date to be either in 1957 or 2050.15

Establishing a specific date and linking it to an end-of-the world scenario appears to be the work of sensationalist hucksters and New Age mystics who have used the world's greatest rumor mill — the Internet — to create unjustified hysteria.

Regarding galactic alignment, again it appears that all the predictions of cataclysmic events are based on junk science. Academic astronomers have pointed out that the alignment will span a period of 36 years. That period began in 1998 with a convergence that was even more precise than what it will be in 2012, yet there have been no dire consequences.16 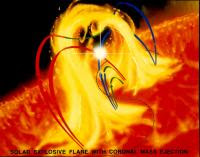 In contrast, the prediction of increased solar flare activity in 2012 is based upon solid science. Every 11 years the sun goes through what is called a solar cycle. During the peak time of this cycle, the sun's magnetic poles switch. This produces, in turn, solar flares which are pieces of the sun which are discharged into space, carrying with them radiation and strong electrical currents. They usually fall back on the surface of the sun. But sometimes a very strong flare, called a Coronal Mass Ejection, will shoot into space like a bullet. These flares can cause major power blackouts when they hit power grids.17

The prediction by the National Center for Atmospheric Research that solar flare activity could increase 30% to 50% over previous years is a legitimate cause for concern. It could result in large scale blackouts, and it could affect such things as satellite communication and cell phones.18

But even the scientists who have issued the warnings have not predicted cataclysmic results. And they have not proposed any specific date. In fact, one of the lead scientists for the National Space Science & Technology Center (NSSTC) argues that the maximum sun flare activity is more likely to occur in either 2010 or 2011.19

The Nostradamus "prophecies" are hardly worth mentioning. This man was a demon possessed practitioner of witchcraft. His so-called prophecies are poetic quatrains that are so obtuse as to be unintelligible. They have therefore never been used to prophesy any event before it happens. Instead, the Nostradamus groupies apply a quatrain to an event after it happens, and even these applications require a vivid imagination. In fact, the writings of Nostradamus are often doctored to make them more applicable as "prophecies." There is nothing in any of his published writings that has reference to the year 2012.20

With regard to the Bible Code, I believe there is no doubt that there are mathematical wonders coded in the Bible that point to its supernatural origin,21 but I do not believe there are secretly coded prophecies that are hidden beneath the surface of the text. The prophecies God has revealed in His Word are clearly stated in the surface words. Serious Bible code researchers have distanced themselves from those like Michael Drosnin who try to use the codes like a crystal ball to predict future events.

Drosnin's Bible Code prediction about the earth being annihilated in 2012 must be considered in reference to the fact that when he published his book in 1997 he claimed that the codes predicted a nuclear war in 2000 or 2006 and a comet strike on the earth in 2006.22 These events failed to take place.

That leaves us with the Web Bot Project, which is the silliest bit of evidence that could possibly be presented. All this system does is catalogue the consensus Internet opinion on any given topic. It amounts to prophecy by majority opinion, and that opinion is derived from the Internet rumor mill!

In the next installment of this 2012 series, we'll look to see what the Bible says concerning the end of this world.