Forecast for Hamas: Assault with a Chance of War

'There are preparations to seriously and dramatically weaken' the terrorist group.

TEL AVIV – Hamas in the Gaza Strip will likely find itself increasingly under assault in the coming months both politically and militarily, including the possibility of another large-scale Israeli offensive in Gaza, according to informed Middle East security officials.

Egypt, the U.S., Israel and the Palestinian Authority all believe that to achieve a PA-led Palestinian state, Hamas' power must be greatly reduced in the near future, the security officials said.

"There are preparations to seriously and dramatically weaken Hamas," a Middle East security official told WND.

Actions apparently are already being taken to isolate Hamas both politically and militarily. Egypt, aided by the U.S., began constructing a steel wall beneath its border with Gaza with the goal of isolating the territory's Hamas rulers while also working to stem the underground smuggling of weapons from Egypt into Gaza.

WND has learned Egyptian forces have encircled the Egyptian Rafah border village, where they have been carrying out raids against militant strongholds associated with Hamas. 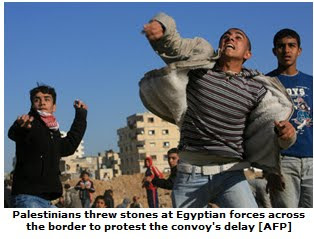 In a further sign of frustration between Egypt and Hamas, just yesterday an Egyptian border guard was killed, and at least 15 Palestinians were wounded in clashes over Egypt's delay of an international aid convoy intended for the Gaza Strip. The convoy was being led by extremist British parliamentarian George Galloway.

Israel is also changing its approach to Hamas.

"It used to be that (Prime Minister Benjamin) Netanyahu was happy with the status quo of a weak PA and strong Hamas so that he could argue there is no peace partner. Now he is under pressure to remove Hamas as an obstacle to a Palestinian state," an Egyptian security official told WND.

Netanyahu has been negotiating a prisoner exchange deal that would see hundreds of Palestinian convicts freed in return for Israeli soldier Gilad Shalit, who has been held by Hamas and other Gaza-based Islamist groups since 2006. Such a deal is sure to strengthen Hamas.

According to the Egyptian security official, however, Netanyahu's latest offer to Hamas, containing a list of prisoners that Israel would be willing to free, was less generous than any of Netanyahu's previous offers, even removing from the list Palestinian convicts that Netanyahu agreed to release just weeks ago.

If that is the case, Hamas may understand the game. According to reports, the terrorist organization responded positively to Netanyahu's latest prisoner exchange offer, sending signals through a German mediator that it is ready to move forward with a deal.

Also, Hamas, perhaps feeling the heat, has expressed willingness to finally enter into a unity agreement with its rivals from PA President Mahmoud Abbas' party.

Hamas leader Khaled Mashaal on Sunday claimed significant progress in talks aimed at reconciling his group with Fatah. Mashaal, who is based in Syria, said that unity talks mediated by Egypt had made "big strides," but he did not elaborate, saying only that the talks had reached the "final stages. Hamas previously spurned attempts to broker a deal with Fatah.

Meanwhile, Middle East security officials did not discount that Israel could launch a major raid of the Gaza Strip similar to the 22 days of confrontations witnessed one year ago that saw dozens of targets bombed and ground troops operating in Gaza. The officials did not talk about the timing of any such raid, but said if progress continues to create a Palestinian state an eventual war in Gaza is likely.