The images streaming in from Haiti look like scenes from Dante's Inferno. The scale of the calamity is unprecedented. In many ways, Haiti has almost ceased to exist.

The earthquake that will forever change that nation came as subterranean plates shifted about six miles under the surface of the earth, along a fault line that had threatened trouble for centuries. But no one saw a quake of this magnitude coming. The 7.0 quake came like a nightmare, with the city of Port-au-Prince crumbling, entire villages collapsing, bodies flying in the air and crushed under mountains of debris. Orphanages, churches, markets, homes, and government buildings all collapsed. Civil government has virtually ceased to function. Without power, communication has been cut off and rescue efforts are seriously hampered. Bodies are piling up, hope is running out, and help, though on the way, will not arrive in time for many victims. 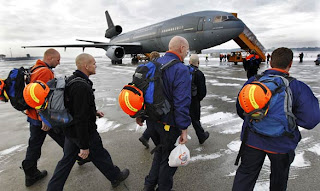 Even as boots are finally hitting the ground and relief efforts are reaching the island, estimates of the death toll range as high as 500,000. Given the mountainous terrain and dense villages that had been hanging along the fault line, entire villages may have disappeared. The Western Hemisphere's most impoverished nation has experienced a catastrophe that appears almost apocalyptic.

In truth, it is hard not to describe the earthquake as a disaster of biblical proportions. It certainly looks as if the wrath of God has fallen upon the Caribbean nation. Add to this the fact that Haiti is well known for its history of religious syncretism - mixing elements of various faiths, including occultic practices. The nation is known for voodoo, sorcery, and a Catholic tradition that has been greatly influenced by the occult.

Haiti's history is a catalog of political disasters, one after the other. In one account of the nation's fight for independence from the French in the late 18th century, representatives of the nation are said to have made a pact with the Devil to throw off the French. According to this account, the Haitians considered the French as Catholics and wanted to side with whomever would oppose the French. Thus, some would use that tradition to explain all that has marked the tragedy of Haitian history - including now the earthquake of January 12, 2010.

Does God hate Haiti? That is the conclusion reached by many, who point to the earthquake as a sign of God's direct and observable judgment.

God does judge the nations - all of them - and God will judge the nations. His judgment is perfect and his justice is sure. He rules over all the nations and his sovereign will is demonstrated in the rising and falling of nations and empires and peoples. Every molecule of matter obeys his command, and the earthquakes reveal his reign - as do the tides of relief and assistance flowing into Haiti right now.

A faithful Christian cannot accept the claim that God is a bystander in world events. The Bible clearly claims the sovereign rule of God over all his creation, all of the time. We have no right to claim that God was surprised by the earthquake in Haiti, or to allow that God could not have prevented it from happening.

God's rule over creation involves both direct and indirect acts, but his rule is constant. The universe, even after the consequences of the Fall, still demonstrates the character of God in all its dimensions, objects, and occurrences. And yet, we have no right to claim that we know why a disaster like the earthquake in Haiti happened at just that place and at just that moment.

The arrogance of human presumption is a real and present danger. We can trace the effects of a drunk driver to a car accident, but we cannot trace the effects of voodoo to an earthquake - at least not so directly. Will God judge Haiti for its spiritual darkness? Of course. Is the judgment of God something we can claim to understand in this sense - in the present? No, we are not given that knowledge. Jesus himself warned his disciples against this kind of presumption.

Why did no earthquake shake Nazi Germany? Why did no tsunami swallow up the killing fields of Cambodia? Why did Hurricane Katrina destroy far more evangelical churches than casinos? Why do so many murderous dictators live to old age while many missionaries die young?

The earthquake in Haiti, like every other earthly disaster, reminds us that the creation it groaning under the weight of sin and the judgment of God. This is true for every cell in our bodies, even as it is for the crust of the earth at every point in the globe. The entire cosmos is awaiting the revelation of the glory of the coming Lord. Creation cries out the hope of New Creation.

In other words, the earthquake reminds us that the Gospel of Jesus Christ is the only real message of hope. The cross of Christ declares that Jesus loves Haiti - and the Haitian people are the objects of his love. Christ would have us show the Haitian nation his love, and share his Gospel. In the midst of this unspeakable tragedy, Christ would have us rush to aid the suffering people of Haiti, and rush to tell the Haitian people of his love, his cross, and salvation in his name alone.

Everything about the tragedy in Haiti points to our need for redemption. This tragedy may lead to a new openness to the Gospel among the Haitian people. That will be to the glory of God. In the meantime, Christ's people must do everything we can to alleviate the suffering, bind up the wounded, and comfort the grieving. If Christ's people are called to do this, how can we say that God hates Haiti?

If you have any doubts about this, take your Bible and turn to John 3:16.

For God so loved the world, that he gave his only Son, that whoever believes in him should not perish but have eternal life.

That is God's message to Haiti.