Conservatives Pulling out the Megaphones

Socialists are convening in Brazil this week to celebrate the shaming of big business and the world's bankers and to call for the redistribution of wealth. In Oregon, it's not so different; on Tuesday voters passed propositions to increase taxes on the wealthy and businesses. Yet, even while Democrats control both Congress and the White House, passionate conservatism is growing in America, and its force is being felt from sea to shining sea.

Brazil: Demonstrators marched out in crowds of thousands in Porto Alegre, Brazil on Monday for the first day of the annual World Social Forum. And by "social" they don't mean tea cakes and chitchat. A 22-year-old Brazilian man longing to lift "the poor out of misery" put one purpose of the gathering into words, saying, "We want to distribute the riches to people. We're fighting for a more equal society and we're saying 'Down with hunger' and 'Down with war.'" 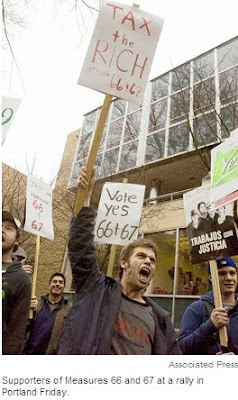 Oregon: Socialist ideals were framed in budget-related terms on Tuesday, as Oregon voters decided to increase taxes on businesses and the state's richest folks. Voters approved Prop 66, which will increase the personal income tax on the states' wealthy by almost two percentage points.

Prop 67 also passed, and will affect businesses by raising the state's minimum corporate income tax. "Tax the rich" proponents say the tax increases are necessary to pay Oregon's bills. They say they fear the state would otherwise cut funding to schools, hospitals, and poor people. Those against the tax increase argue that it will hurt small businesses, pushing them out of the state and resulting in loss of jobs and even higher unemployment.

Conservatives Stepping Up: The socialists in Brazil may delight in the perceived failure of American capitalism. The Oregon voters may choose to play Robin Hood. Both houses of Congress as well as the White House may be held by the Democrats. And yet. Conservatives are not just pressing forward in America, they are getting serious attention.

Massachusetts: Republican Scott Brown made huge news last week when he captured the Massachusetts Senate seat held for 47 years by the late Edward Kennedy. Not only did Brown break the Democrat's supermajority in the Senate as the 41st Republican, renewing the Republican power to filibuster, but he did so in a state that has not elected a Republican to the Senate since 1972.

Brown is not an especially conservative person, even for Massachusetts. He does, however, provide the one vote necessary to put a stick in the spokes of government run healthcare – at least in its current version. Yes, there is voter discontent with the economy, and yes the Democrat contender Martha Coakley made some terrible gaffes during the race. But the healthcare overhaul may have well been the issue to push Brown into the US Senate. After all, Massachusetts voters hired him knowing exactly what he represented and was at stake in the race.

Twenty-something Alice Fallon commented from an Irish pub after the race. "Everyone thinks Massachusetts is so liberal," she added. "And coming from outside, I see it as a very split state, with no middle ground." Last week, that split state sided against the health care bill.

Tim Tebow: Tim Tebow is making big news again, and this time it's not for winning the Heisman trophy as a sophomore. It's not for winning NCAA's QB of the Year in 2007, or the Maxwell Award (he's won it twice) or, most recently, being chosen MVP of the 2010 Sugar Bowl. The Florida Gators quarterback will be starring in a Focus on the Family-sponsored commercial with his mother – a commercial that will promote family values. The commercial is scheduled to air during the Super Bowl.

Tebow was born in the Philippines to parents serving as Christian missionaries. Tim's mother became seriously ill with amoebic dysentery while she was pregnant with him. The drugs used to treat the illness also caused the placenta to detach from her uterus, and doctors recommended an abortion to save Mrs. Tebow's life. She insisted on carrying the baby to term, allowing Tim, her fifth child, to be born. The 22-year-old football player said, "That's the reason I'm here, because my mom is a very courageous woman."

Liberal women's groups are upset because they suspect there will be a pro-life message involved in the Super Bowl ad, and they don't want it aired. CBS has decided to air the ad anyway. Tebow responded to the controversy by saying, "…I don't feel like I'm very preachy about it, but I do stand up for what I believe, and at least you can respect that, because I do stand up. Unfortunately in today's society, not many athletes tend to do that, to at least stand for something."

Considering that more than half of Americans now call themselves pro-life, it seems likely that protests against the ad will get drowned out by the applause on Tebow's behalf.

In The News: In the third week of January, Fox News not only beat out the CNN and MSNBC news channels in ratings, but FNC topped every other cable network in prime time viewers. Coverage of Haiti and the Senate election in Massachusetts won FNC an average of 3.2 million viewers in primetime. USA came in second in primetime for the week, the Family Channel came in ninth, and ESPN ranked 13th. In contrast, CNN and MSNBC landed at the 22nd and 25th spots respectively.

America's growing conservative movement has shown up in a variety of ways. In Utah, the incumbent Republican is facing four challengers in the primary because he's not seen as conservative enough. The Tea Party movement has remained strong and its clout has been widely felt. Those who favor a limited government continue to organize marches and protests through online communication sites like Facebook and Twitter. Thousands turn up at marches, and they present a challenge not only to liberal Democrats, but to big-government Republicans.

The real issue isn't Massachusetts or Utah or the Super Bowl or Tea Parties. The real issue is that liberalism in America has long been losing its appeal, and the silent majority has found not just one, but many megaphones. In a wide variety of ways, conservatives are standing up and making their voices heard, and they are finding that there are a great many more people who agree with them than they had ever realized.

Fox News Finishes Week #1 in All of Primetime Cable - MediaBistro

Tea Partiers Shaking Up Races Across Country - The Washington Post