A Tale of Two Walls

Egypt is building a huge metal wall along its border with the Gaza Strip to cut down on smuggling and penetration by terrorists.

When it is finished in 18 months, the super-strength steel wall that cannot be cut or melted will be about seven miles long and extend 60 feet below the ground to inhibit tunnel-digging. It is said to be impenetrable – however, no one doubts that smugglers and terrorists won't try to burrow beneath it. But it is a deterrent – a big deterrent. 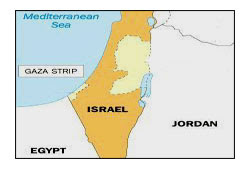 Interestingly, I have heard not one word of protest from the international community about this wall. Contrast this mute non-reaction to the tales of woe sung when the Israelis built similar security fences to protect its civilians from terrorist attacks from Palestinian Authority territories.

That fence, now proven overwhelmingly effective in cutting down terrorist violence, was roundly and bitterly condemned and protested – with comparisons to the Berlin Wall and even Nazi concentration camps.

That wall was protested by the major powers in Europe and the U.S. government.

It was also protested personally by Barack Obama.

What about this new wall Egypt is building for ostensibly the same reasons?

Not a word of protest in the U.S.

In fact, the U.S. Army Corps of Engineers is helping Egypt build it.

Can anyone explain this dichotomy to me?

Am I missing something?

I want to go on record as supporting both walls. I'm all for walls to keep bad guys out. I'm opposed to walls built to keep citizens from escaping tyranny. It's just that simple.

While we're on the subject of walls and their effectiveness against smuggling and terrorists, what about the U.S. border with Mexico?

How many times have we heard that a security fence along the border with Mexico would be ineffective?

If it would be ineffective, why is the U.S. Army Corps of Engineers helping the Egyptians build one on its border with Gaza?

How many times have we heard it would be too expensive?

If it would be too expensive, why is the U.S. government investing in building a wall along Egypt's border with Gaza?

For those not fluent in Middle East politics and geography, you might wonder why Egypt needs a wall of protection from Gaza.

Until recently, Israel occupied Gaza. Then Israel made a fateful decision to evacuate all Jews from the area in a bid to placate demands from the Jew-hating Palestinian Authority and the ethnic cleansers in the international community – the U.S. among them.

It was necessary because the Palestinian Authority wants a Palestinian state that is Jew-free. No Jews are allowed in this new nation being created by the U.S. and the powers of Europe.

The consequences of that decision are still being felt throughout Israel.

Egypt has a slightly different problem.

It never had problems with terrorists while Israel occupied Gaza. Only after Israel left did Egypt face a problem – with Arabs! Israel actually protected Egypt's border from infiltration.

Once again, the contrast between the reception to the two fences – one in Israel and one in Egypt – reveals there are two standards in the Middle East: One for Jews and one for Arabs.

It's OK for Arab nations to erect walls to protect their people from terrorists. It's not OK for the one tiny Jewish state to do so.