How to Survive Hard Economic Times

In last week's Nearing Midnight update, I laid out the reason I believe our nation is on a collision course with financial calamity. In this week's update, I plan to offer my advice about what people can do to survive hard times.

I should probably first explain why Terry and I believe that a "Great Depression" scenario is unlikely to occur just ahead of the Rapture. Here is a condensed version of an email we sent out earlier this week:

We believe Jesus was talking about the Rapture climate in Luke 17:26-29.He used the "days of Noah and days of Lot " to prophesy the time of His coming again.

He listed conditions at the time of that coming. People will be building, marrying, planting - it will be business pretty much as usual for the times. Those times will, of course, be wicked - much like the mockers and violence of Noah's day leading up to the Flood and the homosexuality and violence leading up to Sodom's destruction.

This could not have been Jesus talking about the end of the Tribulation period. At the end of that will be the most horrendous time in history, according to Jesus (Matthew 24:21-22). At that time, as many as two-thirds of the world's population will have died in God's wrath and judgment.

Yet the people in this Luke account are building, marrying, etc., when He suddenly returns and destruction begins.

If there were such great economic cataclysm as to completely throw the world into great chaos - as would occur with the U.S. and all of the world's economies collapsing - there would not be a time such as described by Jesus in His prophecy. People would not be building, marrying, planting, and harvesting. They would be starving, and things would not be going along pretty much as normal, which are described as conditions in Jesus' Luke 17: 26-29 prophecy.

The Rapture could be the pin that pops the economic bubble. The great destruction will then begin. God's wrath and judgment will follow as Antichrist and his global reorganization of things come onto the scene.

Nothing is preventing us from going through a deep recession. The Tribulation hour does seem to be very near, but since a train of economic despair is rapidly heading our way, we can't ignore reality. We may find ourselves having to endure a brief period of profound financial adjustment.

The first sign of problems is not the government defaulting on its massive debt. Uncle Sam has the power of the printing press behind it. The U.S. Treasury can print all the money it needs to continue its operations. 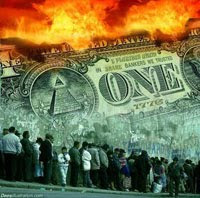 The breaking point is when buyers lose faith in the dollar and in Treasury bills and T-bonds. As confidence falls, inflation and interest rates will begin to climb. The drop in the value of the dollar would be the most painful. In a currency crisis (USD), things like Social Security checks, bank CDs, Treasury bonds, and insurance annuities all become worthless. To help you survive hard times, there are four core things you need to focus on: