Importance of the Dead Sea Scrolls

In 1947, Bedouin goat herders were searching the cliffs along the Dead Sea for (supposedly) a lost goat and came upon a cave containing ancient jars filled with manuscripts. Some of these manuscripts made their way to scholars, spurring a great archaeological race.

Eleven caves produced some 825 manuscripts and thousands of scroll fragments, dating from approximately 200 B.C. to 68 A.D. The writings included copies in the original Hebrew and Aramaic languages of the Old Testament (all but Esther), hymns, prayers, and Jewish writings. Much of the writings pre-date Jesus, so there is no direct mention of him. The strict Qumran community called the Essenes hid their writings in the caves before a Roman invasion killed them. 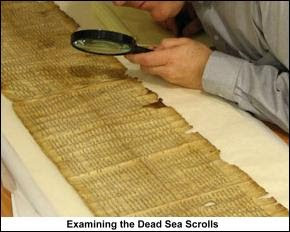 What makes these manuscripts so amazingly important to archeologists is that before 1947 the oldest copy available of the Old Testament was from 1008 A.D. Scholars could finally take our most modern Hebrew and Aramaic copies and compare them to the older Dead Sea Scrolls and try to find potential differences. What they found were accurate copies.

Not even the tiniest letter could be written from memory, as one would glance at the word "to" and write the letters "t" and "o" before glancing back at the original; but every letter was copied singly from the original. No letter could connect with or overlap another letter. The distance between each letter was measured by a single hair or thread. Every letter of every page and book was counted and compared against the original. The number of times each letter of the alphabet occurred in a book was counted and compared against the original. The middle letter of the Pentateuch (the first five books of the Old Testament) and the middle letter of the entire Hebrew Bible were computed and indicated in the text. If one of these calculations was incorrect, the copy was discarded.

What makes the Dead Sea Scrolls so amazingly important to the rest of us is that we can take our Old Testament today and know it compares accurately with a copy from 2000 years ago. They help show us that we can trust that the Bible is the true and accurate word of God, and build our understanding and faith in God upon it.

"The grass withers and the flowers fall, but the word of our God stands forever." - Isaiah 40:8

What are the Dead Sea Scrolls and why are they important? - GotQuestions.org

Dead Sea Scrolls - A Compelling Find - All About Archaeology