Don't Let This Happen in America!

You might think this cannot happen in America. A young Muslim woman converts to Christianity and both Islam and the State of Ohio are working against her. Political paybacks are more important than her life. And what is happening as I write this is chilling because the fate of many more hang in the balance if this woman loses.

I have written about Rifqa Bary once before. She is 17 years old and when she became a believer a year ago, her parents threatened to kill her. She then hitchhiked to Florida and found refuge in a church. Due to corruption both in Florida and Ohio, she is now in a prison-like ordeal. She is back in Ohio and has an attorney who has some ties to the Council on American Islamic Relations (CAIR). Her parents are a part of an extremist mosque in Columbus. 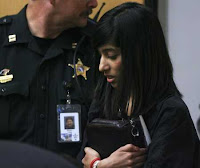 Rifqa is being denied some basic things such as a telephone, Internet access, and school. She is quite isolated as there has been no "approved visitation" list. Hard core criminals may have more rights than Rifqa.

Perhaps the largest Somali community in the U.S. is in the Columbus, Ohio area. It is 70,000 and growing. It is reported that Gov. Strickland has financial ties to this community because of campaign contributions.

Rifqa has become a "test case" for Muslims. They would like to prove that Muslims cannot break free even in America. She is being watched by every subjugated Muslim in America who would like to flee Islam. So far, they are not getting much encouragement.

Judges in that area are sensitive to the political climate and the Somali community and thus it would seem Rifqa Bary doesn't stand a chance. But with God, all things are possible!

It is imperative that Rifqa break the Islamic machine. Will all Americans stand up for religious freedom? Or will we wallow in apathy as a nation, too comfortable to get involved?

The showdown will be December 22 at a dependency hearing in Columbus, Ohio. You can hear more about this on my radio program aired this past weekend here.

Visit DefendChristians.org/ for more information. But here are three suggestions for you:

If you write to Gov. Strickland, please be polite, as it could appear that you represent this ministry. And mean-spirited e-mails never have a positive impact.

Radical Muslims are very proud of the "honor killings" when someone in their family embarrasses them. This is not limited to the Islamic part of the world. Several young women in the U.S. have been slaughtered for dressing too Western or dating the wrong boyfriend. In Rifqa's case, she met Jesus and became a Christian. This may be the supreme offense!

I pray that Christians won't let her down.