Jerusalem sits atop land that would be among the least desirable in terms of real estate values. The natural inclination would be to look for more scenic, lusher beauty rather than the much-improved but still arid landscape in Jerusalem and the surrounding area. But when considering Jerusalem, one is talking in terms not of the natural, but of the supernatural.

Since before the time the Lord led Abraham to Moriah with Isaac in tow, when the patriarch was willing to follow through on the sacrifice of his son, the area that is now Jerusalem has been at the very center of spiritual warfare like no other place on the planet.

Moriah is the site where Abraham laid Isaac upon the makeshift alter and started the plunge of the knife toward his son's heart. The angel of the Lord (likely the preincarnate Christ) stopped the test of the old man's faith by providing the sacrificial ram, caught in the thicket by its horns (read Genesis 22:1-13).

Moriah, the tumultuous centerpiece of Jerusalem to this day, is the place where God directed David to the threshing floor of Ornan the Jebusite, from whom he purchased the site. This would be the place where King David would not be allowed to build God a house because he had the blood of war on his hands. But it is where David's son, Solomon, built the great temple of God (Read 1 Chronicles 3). 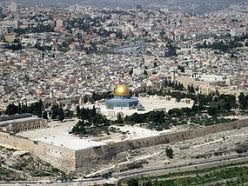 This plateau on Jerusalem's perimeter is where the Ark of the Covenant sat within the Holy of Holies. It is where the veil that separated man from God in the Jewish sacrificial system was torn in two from top to bottom by the hand of God. This occurred when His only begotten Son, Jesus Christ, died on the cross as the once-and-for-all sacrifice for the sin of mankind - so man would forevermore have direct access to God the Father through the one mediator, the man Jesus Christ. This high place in the city of David is the most contested real estate on earth. It is scheduled to become such a cup of trembling that all nations of the world will be drawn to the Valley of Megiddo - Armageddon.

Lucifer couldn't usurp God's throne in heaven, although He tried with all his might (see Isaiah 14). Moriah is the site where Satan will again try to usurp the throne of God - this one the Almighty's earthly throne that is the Temple Mount, where the Ark once sat and where the King of all Kings will one day sit atop a supernaturally elevated Mount Zion.

This real estate named Jerusalem provides the present impetus for the world's call for a two-state solution to the conflict involving Israel and the Palestinians. It is supernatural, spiritual warfare that instigates hatreds in the region and particularly in this ancient city, which is mentioned more than any other in the Bible. Jerusalem is the trigger to Armageddon.

Efforts to divide this city are relentless these days. This news excerpt makes the point:

Sweden's attempts to insert language into an EU resolution on the Middle East that would recognize east Jerusalem as the capital of a future independent Palestinian state harms European efforts to play a significant part in mediating between Israel and the Palestinians, the Foreign Ministry said in a statement issued Tuesday.

The statement followed a Haaretz report that the Swedes [Sweden being the current country that holds the rotating EU presidency] were pushing a resolution that will be discussed at a monthly meeting of EU ministers next week in Brussels that would officially call for the division of Jerusalem. (Herb Keinon, Jerusalem Post, 12/1/09)

Jerusalem will be at the heart of the covenant of false peace that will engulf the city, the Middle East, and all the world in a holocaust of God's holy wrath and judgment. The world's power brokers elite will divide the city and, in God's terminology, "divide My land." The results will be to bring all nations into the battle of the Great Day of God Almighty.

For, behold, in those days, and in that time, when I shall bring again the captivity of Judah and Jerusalem, I will also gather all nations, and will bring them down into the valley of Jehoshaphat, and will plead with them there for my people and for my heritage Israel, whom they have scattered among the nations, and parted my land. (Joel 3:1-2)

Of all the signals of these last of the last days, powerful issues surrounding Israel, Jerusalem, and the Temple Mount in particular, are paramount. They constitute the trigger to Armageddon and Christ's Second Advent.

The Rapture will preempt that time of cataclysm that will culminate at the last great battle. It is incumbent upon everyone who names the name of Christ to get the Word out that there is safety from that horrendous time of judgment only in the Lord Jesus. You can be a part of that mission with your support of the Rapture Ready website ministry. We ask you to join us in this effort with your prayers and in other ways, and particularly with your financial support. There are so many ways we can expand our end-times thrust. Your support is building treasure in Heaven - to where we will one day be called with the shout "Come up here!"

EU: Jerusalem Should Be Shared Capital - Voice of America

EU Seeks to Avoid Confrontation With Israel Over Jerusalem - Bloomberg