Why Is Islam Confusing?

Americans are greatly confused as to what to think about the Muslim religion. Our political leaders constantly tell us that Islam is a “religion of peace.” Presidents Bush one and two, President Clinton, and especially President Barack Obama all repeat this like a ‘mantra’ of indisputable truth. Yet Islam’s own foundational books and its history show conclusively that is not true. The problem is based in a contradiction within the very foundation Islam itself.

There are Muslims who believe that Islam is a peaceful religion and they prove it from verses in Islam’s two most holy and foundational books – the Koran and Hadith. 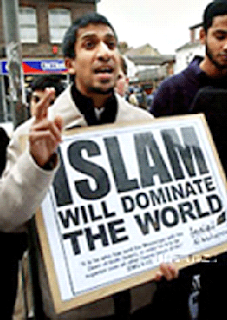 Yet in the history of Islam’s origins, the first four successors of Mohammad known as the “Divinely Guided Ones,” who personally knew and studied under Mohammad, were anything but peaceful. Inspired by verses from the Koran and the sayings of Mohammad later gathered into the Hadith, they exploded off the Arabian Peninsula and started a conquest that inside of 100 years conquered peoples and lands from the Atlantic into the Pacific. So what did the ‘Divinely Guided Ones’ see in the Koran and Hadith that the “peaceful” Muslims today do not? Listen carefully, because the answer will help you to understand the paradox of trying to deal with Muslims. In the early days of Mohammad in Mecca, he was only accepted by a few as Allah’s Prophet. So he had few followers and no army to protect him and enforce his teachings. He finally fled to Medina where he flourished and won many converts in just a few years. From these converts of Medina, he built a powerful army. Now we have to integrate these conditions with the “revelations” that Mohammad received in each situation. During the early days in Mecca, his “revelations” were primarily about peace, kindness and justice. These have come to be known as the early Meccan verses of the Koran. During Mohammad’s days in Medina, his “revelations” became increasingly aggressive, violent and conquest oriented as his followers grew into an army. After he broke a covenant with Mecca, invaded and conquered them, his “revelations” called for spreading Islam and converting people by the sword. At least 109 of those “later Meccan verses” are now known as the war verses. Since every verse of the Koran is held to be absolutely infallible and binding upon the faithful, it presents a real problem. The “war verses” not only over-ride the peaceful verses of the early Meccan “revelations”, they contradict them. I am going to quote from some of those verses and let you see for yourself what they clearly say. But I strongly recommend that you go to the Religion of Peace Website.

What a contrast, Christians are to proclaim and plead with people to receive the gift of pardon the Lord Jesus Christ died in their place to purchase for them. Muslims are commanded to bring the world into submission to Allah at the point of a sword. As the Bible says, “Herein in love. Not that we loved God, but that He first loved us and gave His Son as the payment for our sins.” (1 John 3:10) Now the main point is this. Not all Muslims have become devout enough to believe and act upon these war verses. But when a Muslim like Major Hasan becomes devout and truly believes these war verses from Mohammad’s latter Meccan “revelations”, he ceases being a peaceful Muslim and becomes a martyr in the cause of bringing “infidels” into submission to Allah by an act of terror.

Young frustrated Muslim men can potentially be latent time bombs. So to treat this clear and apparent danger with misguided “political correctness” is suicidal as a nation.

The Everlasting Hatred: The Roots of Jihad - Hal Lindsey (Book)