When Students Are Left for the Wolves

I wasn't prepared for what I was about to hear the evening of November 3. My alma mater, Bethel University in St. Paul, MN, sponsored an Inter-religious Symposium promoting some kind of "common ground" between Buddhism and Christianity. One would think if a Christian had an ounce of discernment, they would deduce that Christianity has nothing to do with Buddhism and such unions are playing with fire. But a panel concluded that there was "common ground" when it came to "meditation." Granted, this kind of meditation could put one in a dangerous altered state of consciousness, but maybe that's ok as long as we can find a bit of unity here! Some would call this common bond of meditation "contemplative prayer."

About 200 students and a few adults were crammed into the symposium auditorium. Attendance by the students was mandatory. The three main presenters were Buddhist monk Witiyala Seewalie from Sri Lanka, Bethel professor Paul Reasoner who is a part of the "Christian Zen" movement, and Ted Meissner, an active Buddhist layman and meditator in Zen, although he grew up in a Christian home. 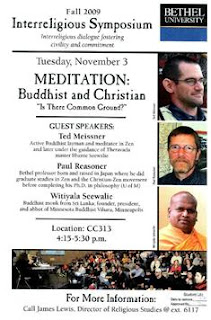 The kind of meditation being promoted by the panelists is the kind that brings "enlightenment," whatever that means.

Ted Meissner described the goal of enlightenment to our daily growth and walk with Christ. Panelist Paul Reasoner did not particularly enlighten anyone to his area of interest, Christian Zen, so I am still clueless as to what that is. I think it's an attempt to again help people become Buddhist-friendly. It was clearly an emphasis on the blending of Christianity and Buddhism. With only about 20 minutes for questions, there was no way I was going to get a multitude of mine answered.

Doing a bit of research told me that Zen is a school or division of Buddhism characterized by techniques designed to produce enlightenment. This term is used repeatedly yet I have never seen such a line-up of unenlightened panelists! In particular, Zen emphasizes various sorts of meditative practices which are supposed to lead the practitioner to a direct insight into the fundamental character of reality - whatever that means! And if I don't fully get it, how are 20 year old college students supposed to get it? This one thing I do know: It doesn't mean getting to know the fundamental character of the one true God.

I was accompanied on this journey by Pastor Bob DeWaay from Twin City Fellowship in Minneapolis. He has contributed some thoughts to this summary of the event.

There was not one whit of "Christianity" that was presented to the Buddhist participating on the panel. This sent a message to him that he is OK being a Buddhist.

The push was "meditation." But being a Buddhist means becoming conscious of one's own divinity. This was not clarified. Had it been clarified, it could have sent out a huge red flag to questioning students at Bethel. So why would Christians get on board with this kind of meditative enlightenment when acknowledging one's own divinity for a Christian would be idolatry and an abomination to the one true God?

The students were encouraged to do meditation that would silence or empty their minds. Keep in mind that some who promote this kind of meditation such as Richard Foster, actually tell you to pray a prayer of protection over yourself before you begin! Yet there was no warning to innocent and naïve students and again, attendance for most there was mandatory.

We heard a lot about those ancient mystics and desert fathers. Here we go with the mystical again, and mysticism always trumps doctrine. Bring on "experience"!! Another panelist talked about the Jesuits he studied under. Is Bethel a Baptist-rooted university or Catholic-rooted? Try the former.

A symposium like this is leading these kids straight to the Emergent Church which goes along with all of the above. And if anything will bring spiritual death, it is all things Emergent. The step beyond that is the one-world religion. [You can hear the entire audio of the 75 minute symposium here.]

So now that we know some of what was talked about, what wasn't covered? With a Buddhist on the panel needing truth, Jesus Christ was not mentioned. Nothing of the gospel was talked about. Sin was left out as was a Christ-less eternity for those following the wrong path. Rather, all that was praised was some kind of glorious unity and mind expansion that could be achieved through Buddhist meditation.

No one talked about the possibility of opening oneself up to demonic influence from emptying the mind in the wrong kind of meditation.

Let me be blunt and say that the meditation techniques promoted at the symposium were Eastern and unbiblical. They claimed that Christians could gain spiritual benefit by using Buddhist meditation. What an affront to the Lord who inspired the Biblical writers. It was as if to say that God failed to give us what we need to draw near to God, but we can find what we need through Buddhism.

A simple Scripture like Psalm 119:15 was never used: "I will meditate on your precepts and consider your ways," presenting a solid biblical statement on "meditation." Or meditating on God's wonders in verse 27. The psalmist meditated, that is, deliberated over God's Word in such a way that he was able to understand it.

"May the words of my mouth and the meditation of my heart be pleasing in your sight, O LORD."

This "meditation symposium" was not pleasing to the Lord.

I am reminded that there are students and faculty at Bethel University who meet regularly for prayer not using any kind of techniques. There is a ministry there called "Pray First" which focuses on the students. As one person said to me, "please also share that God's light is shining brightly in areas at Bethel University."

This is not an attempt to castigate the entire university of teachers and students, many of whom are godly, righteous people. This column is not directed at them. It is directed at some careless faculty who are enthusiastic about their beliefs who should use better judgment than to present Buddhism, "Christian Zen," and contemplative prayer as some good alternatives for the students.

What is Buddhism and what do Buddhists believe? - GotQuestions.org

Jesus Among Other Gods: The Absolute Claims of the Christian Message - Ravi Zacharias (Book)