Myth or Lie? The Fallacy of a Peaceful Islam in the West

Lie upon lie, politicians in most Western countries from Gordon Brown and Tony Blair to Bill Clinton, George Bush and Barak Obama continue to lie each time another act of Islamic terror is perpetrated against the West with the protest that Islam is a tolerant religion. The biased media machine is always prepared to propagate this myth as is the left wing academic establishment. In a recorded video Barak Obama even once referred to his “Muslim faith”, irrespective of whether that was an error or not, and it thus remains unclear if he indeed is a Muslim or not.

George Bush went on television singing the praises of Islam after September 11th and placed a Koran in the White House to honor it, commissioned celebrating Ramadan in the White House, and extended the express visa program to Saudis for a full year despite most of the 9-11 hijackers being Saudi and connected to the House of Saud who are, effectively, the Saudi government who funded Al Qaeda. As the UN ignores the Islamic genocide of Christians, choosing instead to condemn Israel’s self-defense against Islam, both the Bush and Obama administrations as well as James Baker acted against the interests of the families of the September 11th victims murdered by Islam by demanding that members of the Saudi government not be litigated against for funding Al Qaeda. 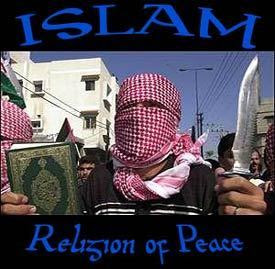 Now Barak Obama fails to call the Ft. Hood attack an act of terror and orders an investigation as to how a military medical officer could perform such an act of murder. The fact that the murderer was a fundamentalist Muslim yelling, “Allah hu akbar” already, of course, provides the reason why this devout Muslim psychiatrist with a penchant for sex shows murdered 13 Americans in an act of terror. Meanwhile Obama attempts to engage Iran even as Iran provides hardware to kill Americans and Israelis in Iraq, Lebanon and elsewhere and suppresses the human rights of its own internal opponents.

The fact that the oil whore liars of Washington, White Hall, the BBC, Harvard, and the Bush Ranch cannot produce a single Islamic country that is either peaceful or tolerant is something they expect us to ignore as they also expect us to turn deaf ears to the Christian church persecuted in heathen Islamic countries such as their beloved Saudi Arabia, where their true loyalty appears to rest. And once again a number of these popular myths are debunked by Muslims themselves.

First: Like the attempted airport attacks in Glasgow, Scotland by Muslim medical doctors, we again witness that terror is an integral component of fundamentalist Islamic belief to the degree that even the most educated Muslims in supposedly humanitarian professions are more than willing to perpetrate such acts. It is NOT only uneducated Muslims who are prone to terror. In a poll taken in 16 countries after September 11th, 63% of Muslims responded that they believed the suicide attacks were justified.

The Islamic doctrine of "Al-taqiyya" teaches it is permissible to lie in order to advance jihad against non-Muslims. They can falsely claim to believe in peace and tolerance when they do not because of a religion that allows them to lie to non-Muslims whom they want to conquer or murder. Such Muslims do not often have to lie, however; there is a usually a President of the United States (either a Democrat OR a Republican) or a Prime Minister of Great Britain more than ready to lie for them.

Second: Once again we are witness to the implausibility of the ridiculous claim that there are Westernized or even Americanized Muslims who are like the rest of us. The Ft. Hood murderer and the Imam of his mosque are both American-born U.S. citizens. A fundamentalist Muslim can never be accepted or trusted as an American in the way people of other faiths can. Their faith is in a god of hate and requires a commitment to a religion of murder and terror which does not allow them to elicit such trust.

One of our expressed fears for some time is that in countries such as the United Kingdom, because the mainstream political parties will not defend Britain from the fundamentalist Islamic invasion, ordinary people are being driven into the clutches of the BNP (British National Party) as the only voice of honesty available and the only ones apparently willing to protect them and their country from this ugly cancer of violence, terror, murder, forced marriages of under-age girls, honor killing of women, and intolerance. It is a sad day when people are forced to support racists, some of whom are virtual Neo-Nazis fully capable of executing their hate against Asians, Blacks, Jews, Arabs, Gypsies and others because of mere skin color or ethnicity, in an act of desperation because of the failures of their own governments.

We are prepared to recognize that there may be individual, cultural Muslims who are not fundamentalists and who do, in fact, wish to live in peace with other communities, who are not Jew-haters or anti-Christian, and only wish to be good citizens. These too, however, are among the first victims of fundamentalist radicals as we can presently witness in contemporary Iran. The actions of Islamic fundamentalists can too often result in moderate Muslims being unfairly placed into the same category as the fundamentalists in the climate of fear the Saudi-funded CAIR organization creates. At least twice the U.S. Justice Department identified CAIR (Council for American Islamic Relations) officials with Islamic terror groups. Yet this organization is allowed to continue to operate inside the U.S. by our corrupt government.

There are two lessons of Ft. Hood that should have already been learned long ago but have not been, and if our corrupt government has its way still will not even in the face of this event. The first is that there is no such thing as a peaceful Islamic fundamentalism that is socially and politically compatible with Western values of pluralism, democracy, and tolerance. The second is that the politicians, left-wing academics, biased media, and Islamic spokesmen who say it is peaceable, tolerant and compatible with our values are liars.

Israel, the Church and the Jews - James Jacob Prasch (Book)