“They Did Not Honor Him as God, or Give Thanks”

Thanksgiving is a deeply theological act, rightly understood. As a matter of fact, thankfulness is a theology in microcosm - a key to understanding what we really believe about God, ourselves, and the world we experience.

A haunting question is this: How do atheists observe Thanksgiving? I can easily understand that an atheist or agnostic would think of fellow human beings and feel led to express thankfulness and gratitude to all those who, both directly and indirectly, have contributed to their lives. But what about the blessings that cannot be ascribed to human agency? Those are both more numerous and more significant, ranging from the universe we experience to the gift of life itself. 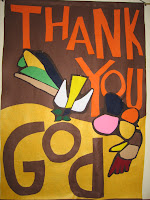 Can one really be thankful without being thankful to someone? It makes no sense to express thankfulness to a purely naturalistic system. Daniel Dennett, one of the foremost figures among the "New Atheists," describes human life as "an ultimately transient twig on the copiously arborescent tree of life." Dennett is a clear-headed evolutionist who takes the theory of evolution to its ultimate conclusion - human life is merely an accident, though a very happy accident for us. Within that worldview, how does thankfulness work?

The Apostle Paul points to a central insight about thankfulness when he instructs the Christians in Rome about the reality and consequences of unbelief. After making clear that God has revealed himself to all humanity through the created order, Paul asserts that we are all without excuse when it comes to our responsibility to know and worship the Creator.

For since the creation of the world His invisible attributes, His eternal power and divine nature, have been clearly seen, being understood through what has been made, so that they are without excuse. For even though they knew God, they did not honor Him as God or give thanks, but they became futile in their speculations, and their foolish heart was darkened. Professing themselves to be wise, they became fools. . . (Romans 1:20-22).

This remarkable passage has at its center an indictment of thanklessness. They did not honor Him as God or give thanks. Paul wants us to understand that the refusal to honor God and give thanks is a raw form of the primal sin. Theologians have long debated the foundational sin - and answers have ranged from lust to pride. Nevertheless, it would seem that being unthankful, refusing to recognize God as the source of all good things, is very close to the essence of the primal sin. What explains the rebellion of Adam and Eve in the Garden? A lack of proper thankfulness was at the core of their sin. God had given them unspeakable riches and abundance, but forbade them the fruit of one tree. A proper thankfulness would have led our first parents to avoid that fruit at all costs, and to obey the Lord's command. Taken further, this first sin was also a lack of thankfulness in that the decision to eat the forbidden fruit indicated a lack of thankfulness that took the form of an assertion that we creatures - not the Creator - know what is best for us and intend the best for us.

They did not honor Him as God or give thanks. Clearly, honoring God as God leads us naturally into thankfulness. To honor Him as God is to honor His limitless love, His benevolence and care, His provision and uncountable gifts. To fail in thankfulness is to fail to honor God - and this is the biblical description of fallen and sinful humanity. We are a thankless lot.

Sinners saved by the grace and mercy of God know a thankfulness that exceeds any merely human thankfulness. How do we express thankfulness for the provision the Father has made for us in Christ, the riches that are made ours in Him, the unspeakable gift of the surpassing grace of God? As Paul wrote to the Corinthians,

"Thanks be to God for His indescribable gift" (2 Corinthians 9:15).

So, observe a wonderful Thanksgiving - but realize that a proper Christian Thanksgiving is a deeply theological act that requires an active mind as well as a thankful heart. We need to think deeply, widely, carefully, and faithfully about the countless reasons for our thankfulness to God.

It is humbling to see that Paul so explicitly links a lack of thankfulness to sin, foolishness, and idolatry. A lack of proper thankfulness to God is a clear sign of a basic godlessness. Millions of Americans will celebrate Thanksgiving with little consciousness of this truth. Their impulse to express gratitude is a sign of their spiritual need that can be met only in Christ.

So have a very Happy Thanksgiving - and remember that giving thanks is one of the most explicitly theological acts any human can contemplate. O give thanks to the Lord, for He is good; for His lovingkindness is everlasting (1 Chronicles 16:34). Give thanks.

What should be the focus of Christians on Thanksgiving? - GotQuestions.org

Giving Thanks to the Father - Grace to You (John MacArthur)