JERUSALEM – While the Obama administration has continued its diplomatic overtures to the Syrian leadership, America's top commander in Iraq says weapons and fighters – possibly linked to al-Qaida – are coming in from Syria.

U.S. General Ray Odierno, commander of U.S. forces in Iraq, told Reuters that investigations into massive suicide bombings in Baghdad on Oct. 25, in which more than 150 people died, indicated explosives or insurgents were coming across from neighboring Syria. 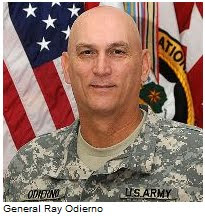 Odierno implied some tied to Syria's ruling Baathist party may be supporting al-Qaida attacks in Iraq.

"There's still a small foreign element to al-Qaida, there are some who used to be Sunni rejectionists or ex-Baathists who are involved in this because of course they don't want the government to succeed," he said.

"My experience is there probably was some movement of fighters or explosives coming from Syria," Odierno added.

Reuters reported the U.S. commander's comments reinforced accusations by the government of Shiite Prime Minister Nuri al-Maliki that Syria was giving a safe haven to Baathists plotting attacks in Iraq and that Baathists were working with al-Qaida.

Meanwhile, the Obama administration has been stepping up diplomatic overtures to Syria.

As WND reported last month, the Obama administration dropped American opposition to a European Union partnership deal worth billions per year for the Syrian economy without first extracting a concession from Syria to end its military alliance with Iran or address suspected human-rights violations. A signing ceremony was reportedly supposed to take place in October, but was delayed.

In a surprise move in June, the White House announced it decided to send a U.S. ambassador back to Syria, a dramatic sign of reconciliation between the two countries.

The U.S. withdrew the American ambassador to Syria in 2005 after the assassination of former Lebanese Prime Minister Rafic Hariri. Syria was widely blamed in the murder.

Syria, in a military alliance with Iran, is also accused of supporting the insurgency against U.S. troops in Iraq and Afghanistan. Syria openly supports Palestinian terrorism and hosts the leaders of the Hamas and Islamic Jihad terrorist groups.

Just last week, the International Atomic Energy Agency demanded an urgent and immediate visit to suspected illicit nuclear sites in Syria. The White House has yet to comment on those accusations.