Questions Obama Must Answer on Afghanistan

Next week President Obama is expected to announce his new Afghanistan strategy. Americans should look for answers to four questions when judging that plan. What’s at stake? What’s the desired end state? How will he accomplish the mission? How much will it cost?

Afghanistan will define Obama’s presidency which might explain the long, dysfunctional process he followed since his commander, Gen. Stanley McChrystal, warned:

“Failure to gain the initiative and reverse insurgent momentum in the near-term … risks an outcome where defeating the insurgency is no longer possible.”

Almost three months have passed since McCrystal’s dire assessment and a combination of factors proved politically awkward for Obama - high American death counts, a corrupt Afghan election and a resurgent enemy. His assessment ends this week and next week he must answer questions. 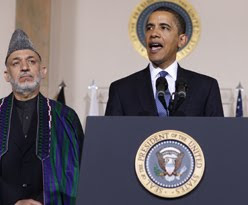 What’s at stake? Presidential candidate Obama made Afghanistan “his war.” Weeks after assuming the presidency Obama announced a reinforcement of 21,000 troops and a new strategy: al Qaeda was the target and counterinsurgency operations for destroying it.

Last March, Obama argued that if the Taliban are left unchecked it “…will mean an even larger safe heaven from which al Qaeda would plot to kill more Americans. So this is not only a war worth fighting, this is fundamental to the defense of our people.” Has the president’s understanding of the threat changed and, if so, how and why?

There is a hint of a shift in Obama’s thinking. In October, retired Gen. James Jones, Obama’s national security adviser, said there were “less than 100” al Qaeda members operating in Afghanistan without the “ability to launch attacks on either us or our allies.” Apparently, Jones doesn’t “foresee the return of the Taliban” and that the “next step in this is the sanctuaries” in Pakistan. Is Obama preparing to quickly exit Afghanistan while increasing support for Pakistan? Is the threat diminished?

What’s the desired result for America? Last week, Obama outlined a possible Afghanistan endstate declaring he wants to create enough stability and build-up the Afghan security forces so they “…can do the job of keeping their country together.” This is a nuanced version of the March endstate. What does “keeping their country together” really mean for America’s security?

How will he accomplish the mission? Obama hired McChrystal because of his counterinsurgency expertise. That means he views the center of gravity as the Afghan people which was the basis for McCrystal’s dire assessment. Obama has to overcome the dire situation through a combination of improved security, development and good governance, similar to our Iraq surge strategy.

The Afghans need far more and capable security forces - police and army - before they are ready to assume the mission. Army training, which is shepherded by America, is going well but police training and vetting by our allies has been shoddy. Only a quarter of police are trained. They frequently quit and often change sides. Their ranks must grow but only after serious problems like corruption are fixed.

The 96,000 strong Afghan National Army (ANA) is in better shape than the police. Retired Marine Corps Colonel Jeff Haynes, who addressed the Philadelphia-based Foreign Policy Research Institute, spent a year advising the ANA’s 201st Corps. He cautions against a rapid expansion of the ANA because that would undermine the fragile success that has been achieved to date. The primary problem is the ANA’s leadership deficit, says Haynes.

Haynes argues that counterinsurgency is “leader-centric” warfare. The ANA’s primary problem is weak leadership and a surge in growth will exacerbate that problem. He cautions that growing the ANA rapidly will result in poorly trained, less effective units that break and run on the battlefield or collaborate with the enemy. These soldiers will be more likely to engage in corruption and absences will increase.

Good governance and development go together but necessarily follow security. Corruption touches every aspect of Afghan life, fix that problem, add aid for development - jobs, education and infrastructure - fostered by expert oversight and good governance has an opportunity to grow.

The U.S. Army developed the Social Science Research and Analysis Program that provides insights into Afghan corruption. It found most Afghans lack confidence in their legal establishment’s ability or willingness to end corruption. They estimate that nearly 90 percent of those currently serving in government are using their posts to enrich themselves.

Obama is pressuring Afghan president Hamid Karzai to clamp down on corruption. Last week at his second inauguration, Karzai promised “The government of Afghanistan is committed to end the culture of impunity and violation of law and bring to justice those involved in spreading corruption and abuse of public property.”

But many Afghans doubt Karzai can curb corruption. He must clear his cabinet of ministers wrapped up in bribery and kickback schemes, and the problem allegedly includes his brother as well. Afghans perceive they are ruled by a thieving class which weakens support for government and bolsters sympathy for the insurgents.

Adjunct to our efforts in Afghanistan is a parallel effort in troubled Pakistan. That atomic-armed neighbor must wrestle itself free from insurgents and terrorists. Islamabad’s increased willingness to tackle its problems, secure the border territory and deny terrorists sanctuary is critical to stabilizing the region. Obama must address this issue.

Finally, how much will Obama’s new strategy cost?

McCrystal’s “ink spot” strategy requires more troops, perhaps 40,000 more than the 68,000 now in Afghanistan. The cost of adding an American soldier to the fight is at least $1 million or for 40,000, according to McChrystal, somewhere between $40 and $54 billion more annually. The high cost-per-soldier is understandable when one considers that it cost as much as $400 a gallon to deliver fuel to our troops fighting in the mountains.

Then there is the cost in blood. The U.S. has lost 923 servicemembers to combat in Afghanistan since 2001 and many thousands of others wounded. Increasing our footprint will increase the blood spilt and rob our military’s flexibility to respond to other crises.

In March, Obama pledged to send “agricultural specialists and educators, engineers and lawyers” across Afghanistan to relieve the development burden on our troops. That civilian surge never happened. But once our troops stabilize the region, who will help Karzai’s government develop and bring good governance?

There’s also the matter of burden sharing. There are 42 allied countries in Afghanistan but only a few fight and two of those, Canada and the Netherlands, plan to pull their troops out in 2010 and 2011. Obama needs to explain the equitability of the effort to include combatants and aid money for development.

Time is a precious expendable resource. We are into our ninth year in Afghanistan and successful insurgencies last on average 14 years. Last week, Obama said “My preference would be not to hand off anything to the next president.” Does that mean Obama expects the war to last up to seven more years?

The world will watch when Obama announces his new Afghan strategy. His answers to the four critical questions will define his presidency and America’s security for years in the future.

Obama: Goal to Finish the Job in Afghanistan - AP