Many Christian leaders have bought into the hoax of global warming and climate control despite God's word in Genesis 8:22 that promises...

"While the earth remains, seedtime and harvest, and cold and heat, and summer and winter, and day and night shall not cease."

They bought the lie that man was killing the planet and that the only solution is a global initiative to control the climate. That initiative - controlled by socialists and communists - is to change the climate by redistributing the earth's wealth under a global government - a one world order. Many prominent Christian leaders signed the "Evangelical Climate Initiative" in February of 2006. 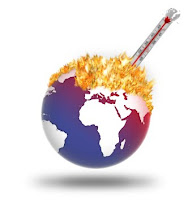 "Now is the time for followers of Christ to help solve the global warming crisis. There is overwhelming evidence that human activity is a major cause, and we know that the impacts of climate change would be hardest on the poor and vulnerable, and on future generations."

Some are members of the ungodly emergent church movement, some are avowed socialists, some are part of the Kingdom Now movement and a handful were probably just misguided because they truly believed they should be good stewards of God's creation. But all bought the lie of man.

This deceitful agenda of men has been exposed. The London Times reported that the leading global warming scientists at the University of East Anglia Climatic Research Unit - the linchpin of global warming studies...

"have admitted throwing away much of the raw temperature data on which their predictions of global warming are based" meaning that "other academics are not able to check basic calculations said to show a long-term rise in temperature over the past 150 years."

The London Telegraph's Christopher Booker, who has written books about global warming, says,

"Our hopelessly compromised scientific establishment cannot be allowed to get away with the Climategate whitewash."

Nevertheless, world leaders are about to gather in Copenhagen for a climate summit, totally ignoring the flawed science. They wish to create a global government to combat climate change. The one world order. The newly appointed "president" of Europe, Belgium Prime Minister Herman van Rumpuy said on November 19th,

"The climate conference in Copenhagen is another step towards the global management of our planet."

The goal is not climate control, but rather people control. Yet America's leader is on his way to support this abrogation of US sovereignty. Indeed, neither he nor the aforementioned evangelical leaders have addressed the scientific lies of global warming. If only they believed God's word over man's.