America's Foundations Are Being Destroyed: What Can the Righteous Do?

A controversy has broken out between two sides over a serious issue. It concerns The Manhattan Declaration: A Call of Christian Conscience, which has been in the works for months and released just prior to Thanksgiving. Allow me to present the case the signers are making for this Declaration and then share concerns that others have who will not sign it. If I may, allow me to report and you decide.

Bill Wilson, a Washington-based journalist and a part of Bill Koenig's Koenig's International News recently summed up the unstable tide of our times. He says,

"The Senate is poised to debate socialized health care and take a vote on it despite its unconstitutionality and opposition from the American people. This bill shreds the Constitution and the rights of Americans under the false pretense that it will provide health insurance to every American. This bill is the linchpin to legislating unprecedented and unconstitutional socialist humanism as the form of government in America. These usurpers in Congress must be stopped, and the American people must be heard from. From a Constitutional perspective this legislation, in effect, surrenders the power of the people to the power of the government."

Additionally, we have activist judges and other leftists who are attempting to ram down the throats of Christians some of the most radical, anti-biblical policies in the history of America. "Conscience issues" are facing doctors, nurses, pastors, ministries, radio personalities, and more. 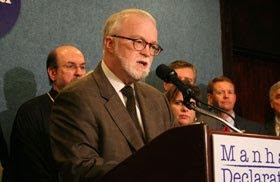 As a result, 150 leaders representing Evangelical Christianity, Catholicism, and Orthodox Christianity, issued a joint statement called The Manhattan Declaration reaffirming their opposition to many of these conscience issues. In a nutshell they state,

"Because we honor justice and the common good, we will not comply with any edict that purports to compel our institutions to participate in abortions, embryo-destructive research, assisted suicide and euthanasia, or any other anti-life act. We also will not bend to any rule purporting to force us to bless immoral sexual partnerships, treat them as marriages or the equivalent, or refrain from proclaiming the truth, as we know it, about morality and immorality and marriage and the family. We will fully and ungrudgingly render to Caesar what is Caesar's. But under no circumstances will we render to Caesar what is God's."

Pretty gutsy! Again, these men and women are risking a lot! They have the courage to gamble with their convictions should a radical government decide to clamp down on them.

Indeed, socialist humanism is trying to take over America. Many of our leaders would love us to embrace government as our god. Someone once said that absolute evil is coming out of Washington.

Evil men and seducers shall wax worse and worse, deceiving and being deceived (2 Timothy 3:13).

They are waiting in the wings to take over all the freedoms Americans have known. It is the aim of many of these secular humanistic men and women to relegate the Christian worldview to the trash heap of history.

You can read the entire Manhattan Declaration here and view the signers here.

But some very prominent Evangelicals would not sign on to this declaration as they say the gospel is nowhere presented or explained. They suggest it is because of the contradictory views held by the broad range of signatories regarding what the Bible teaches and what it means to be a Christian. They suggest Evangelicals are uniting in an ecumenical way with what they call "various apostate traditions" and those who represent "a different gospel." These men and women are standing on their convictions as well.

John MacArthur will not sign on. Nor will my friend and radio colleague David Wheaton.

"I believe we are facing an inevitable and culture-determining decision on the three issues centrally identified in this (Manhattan Declaration) statement. I also believe that we will experience a significant loss of Christian churches, denominations, and institutions in this process. There is every good reason to believe that the freedom to conduct Christian ministry according to Christian conviction is being subverted and denied before our eyes. I believe that the sanctity of human life, the integrity of marriage, and religious liberty are very much in danger at this very moment."

"We are especially troubled that in our nation today the lives of the unborn, the disabled, and the elderly are severely threatened; that the institution of marriage, already buffeted by promiscuity, infidelity and divorce, is in jeopardy of being redefined to accommodate fashionable ideologies; that freedom of religion and the rights of conscience are gravely jeopardized by those who would use the instruments of coercion to compel persons of faith to compromise their deepest convictions."

The Bible says, If the foundations be destroyed, what can the righteous do? (Psalm 11:3). Our foundations are being hammered like never before. Edmund Burke wasn't quoting the Bible but he spoke the truth when he said,

"All that is necessary for evil to triumph is for good people to do nothing."

Signers pledge to each other, and to fellow believers, that...

"no power on earth, be it cultural or political, will intimidate us into silence or acquiescence. It is our duty to proclaim the Gospel of our Lord and Savior Jesus Christ in its fullness, both in season and out of season. May God help us not to fail in that duty."

Nor can I take issue with John MacArthur who states,

"It (The Manhattan Declaration) assumes from the start that all signatories are fellow Christians whose only differences have to do with the fact that they represent distinct 'communities.' Points of disagreement are tacitly acknowledged but are described as 'historic lines of ecclesial differences' rather than fundamental conflicts of doctrine and conviction with regard to the gospel and the question of which teachings are essential to authentic Christianity."

"In short, support for The Manhattan Declaration would not only contradict the stance I have taken since long before the original 'Evangelicals and Catholics Together' document was issued; it would also tacitly relegate the very essence of gospel truth to the level of a secondary issue. That is the wrong way - perhaps the very worst way - for Evangelicals to address the moral and political crises of our time. Anything that silences, sidelines, or relegates the gospel to secondary status is antithetical to the principles we affirm when we call ourselves Evangelicals."

We cannot slaughter babies, unplug the elderly, devalue the imperfect, glorify perversity, and devalue marriage without consequences. God cannot restore America until we make things right spiritually. Can a "declaration" do that? It would be far more appropriate if every church in America and the Western world got right with God, but let's be realistic. That global end-time harvest many speak of is just not going to happen other than in pockets here and there.

Pray about your involvement in this. If your conscience tells you not to align with the signers, so be it. You can sign on here. I believe judgment should be withheld on individual decisions regarding this issue. To be sure, tens of thousands of signers are risking their ministries and are courting punishment to stand for good and not evil.

So let's withhold the chastising of the signers. We are all aware of the Bible's warnings not to be unequally yoked. This is the biggest drawback to The Manhattan Declaration. And all ecumenical endeavors put us on the road to the one-world religion. The question is, could signing this be an exception in light of the tide of our times and the need for a unified effort to stop evil?

While there are troubling names heading up The Manhattan Declaration who are outside of the Evangelical camp and who represent that "different gospel," there are also some very sound leaders who have signed on. I would be honored to identify with the likes of Kay Arthur, Dr. Albert Mohler, Tony Perkins, Joni Eareckson Tada, Dr. Frank Wright from the National Religious Broadcasters, and others.

I probably land closer to radio Bible teacher and preacher Alister Begg on this issue. He states,

"In accord with others who have chosen not to sign, my reservation is not with the issues themselves, or in standing with others who share the same concerns, but it is in signing a declaration along with a group of leading churchmen, when I happen to believe that the teaching of some of their churches is in effect a denial of the biblical gospel. I wonder whether it might not have been more advantageous for Evangelicals to unite on this matter, rather than seeking cooperation with segments from Rome and Eastern Orthodoxy."

Perhaps it's not too late to do this in some other form or declaration.

Now you know both sides of the story. Ask God for guidance on just where you should stand and He will lead you. No one should press you to compromise your convictions.

What does the Bible say about abortion? - GotQuestions.org