An Islamic gunman reportedly shouted "Allah Akbar" before killing 13 and wounding 30 at Fort Hood, Texas. Major Nidel Malik Hasan was reportedly mad about his impending deployment to Iraq and decided to kill his fellow soldiers over it. The Associated Press, quoting federal law enforcement officials, said Hasan had come to their attention at least six months ago because of Internet postings that discussed suicide bombings and other threats. The officials said they were still trying to confirm that he was the author. The son of Jordanian immigrants, Hasan was a practicing Muslim and had hired an attorney to litigate what he called harassment from his military colleagues over his radical religious beliefs. 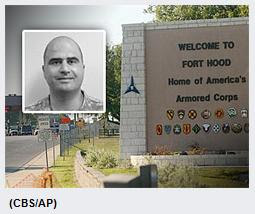 "maybe Muslims should stand up and fight against the aggressor. At first we thought he meant help the armed forces, but apparently that wasn't the case. Other times he would make comments we shouldn't be in the war in the first place."

"A former neighbor of Hasan's in Silver Spring, Md. said he lived there for two years with his brother and had the word "Allah" on the door."

Hasan was a military psychiatrist who joined the armed services against his parents wishes. He recently received a bad performance review before his transfer from Walter Reed Hospital to Texas, according to news reports.

The Council on American Islamic Relations has condemned the violence "in the strongest possible terms." Then CAIR held a news conference where another statement was issued, saying,

"Unfortunately, based on past experience, we also urge American Muslims, and those who may be perceived to be Muslim, to take appropriate precautions to protect themselves, their families and their religious institutions from possible backlash."

CAIR is an unindicted co-conspirator in a case involving laundering charity money to support terrorism, and has been accused of being a terrorist front in America. Islam is undoubtedly the antithesis of America's Constitutional Republic.

Islam is a fascist political system using false religion to recruit and control its followers. Islam's bible, the Koran, is the violent ramblings of its prophet Mohammed, who commands that all Christians and Jews be killed unless they convert to Islam.

Jeremiah 51:14 warns another nation of which America has become very similar,

"Surely, I will fill thee with men, as with locusts; and they shall raise a battle cry against thee."

Remember that the US Navy was birthed to combat the Islamic Barbary Pirates whose leader told Thomas Jefferson they plundered US ships and enslaved their passengers because they were Christian.

In the 1500's Spain handled the Islamic problem by expelling them from the country.