“The UN General Assembly approved on Thursday an Arab-backed resolution endorsing the Goldstone Report, paving the way for the matter to be sent to the Security Council,” reports the Jerusalem Post. “A total of 114 nations voted in favor of the resolution and 18 voted against it, with 44 members abstaining.”

How is it possible that Israel only has 17 other true friends in the world, out of 192 countries? 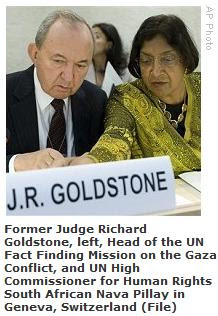 An evil wind is blowing against the State of Israel and the Jewish people. This resolution — written by the Arab League — calls for a investigation of Israel for “war crimes” during the January 2009 Gaza war in which Israel was defending itself from some 12,000-plus rockets, missiles and mortars that had been fired by Hamas at civilian centers in southern Israel over the course of several years. Yet the resolution never even mentions the word “Hamas.” The resolution has no balance, no sense of fair play, and effectively denies that Israel has a right of self-defense, which is, in fact, a basic right affirmed in the U.N. charter. The resolution affirms the findings of the anti-Israel and ultimately anti-Semitic Goldstone Report and recommends the Secretary General require the Security Council to take up the issue and condemn Israel. After all, the war crimes were committed by Hamas for firing rockets at civilians, for using civilians as shields in Gaza during the war, for using elementary schools, hospitals and mosques as military bases during the war. Yet the U.N. cares not one bit about such bitter truths.

If countries cannot fight against terrorists in self-defense, will the U.S. be charged with war crimes for fighting al Qaeda and the Taliban in Afghanistan? Will Great Britain? Will Australia? Will Canada? Will other NATO powers?

Pray that the U.S. vetoes the resolution in the Security Council, if it does in fact get that far. The United States, thank God, voted against this wicked resolution. Congressional pressure on the White House to take actions supporting Israel is working, but more must be done to pressure the Obama administration to stand consistently with Israel, not against her.

Canada — ably led by Prime Minister Stephen Harper, the most pro-Israel leader in the Western alliance — also voted against, as did Australia. Europe, however, was split. Germany voted against. France and Great Britain abstained.

Here’s the breakdown of the vote: