Rumors of Iran, Israel, and war are everywhere you look in today’s news headlines, and for those with knowledge of bible prophecy, this should command immediate attention.

Because, when it comes to the end times, the bible has a lot to say about Israel and war with her neighbors. In fact, Iran is specifically mentioned in this context… 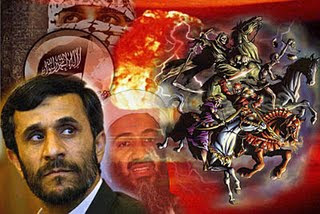 2,600 years ago, the prophet Ezekiel identified modern day Iran (Persia) as a key player in the last days Gog/Magog invasion:

“This is another message that came to me from the Lord: ‘Son of man, prophesy against Gog of the land of Magog, the prince who rules over the nations of Meshech and Tubal. Give him this message from the Sovereign Lord: Gog, I am your enemy! I will turn you around and put hooks into your jaws to lead you out to your destruction. I will mobilize your troops and cavalry and make you a vast and mighty horde, all fully armed. Persia, Ethiopia, and Libya will join you, too, with all their weapons. Gomer and all its hordes will also join you, along with the armies of Beth-togarmah from the distant north and many others.’” Ezekiel 38:1-6 (NLT)

In addition, Psalm 83 identifies Syria as a land that will conspire to destroy the nation of Israel:

“‘O God, don’t sit idly by, silent and inactive! Don’t you hear the tumult of your enemies? Don’t you see what your arrogant enemies are doing? They devise crafty schemes against your people, laying plans against your precious ones. ‘Come,’ they say, ‘let us wipe out Israel as a nation. We will destroy the very memory of its existence.’ This was their unanimous decision. They signed a treaty as allies against you – these Edomites and Ishmaelites, Moabites and Hagrites, Gebalites, Ammonites, and Amalekites, and people from Philistia and Tyre. Assyria has joined them, too, and is allied with the descendants of Lot.” Psalm 83:1-8 (NLT)

All that said, why should it matter that the prophets long ago identified these nations as end times enemies of Israel?

So current events in the Middle East should serve as a reminder of Christ’s imminent return.

In fact, the Lord Himself expected his disciples to carefully examine the Word of God so as to be prepared for His return:

“So be prepared, because you don’t know what day your Lord is coming.” Matthew 24:42 (NLT)

Jesus went so far as to rebuke the Pharisees for not recognizing the signs of the times, for the religious leaders of His day had full knowledge of the prophecies of the Messiah, yet they still chose not to believe in Him:

“One day the Pharisees and Sadducees came to test Jesus’ claims by asking him to show them a miraculous sign from heaven. He replied, ‘You know the saying, ‘Red sky at night means fair weather tomorrow, red sky in the morning means foul weather all day.’ You are good at reading the weather signs in the sky, but you can’t read the obvious signs of the times!’” Matthew 16:1-3 (NLT)

This passage reveals the expectation Jesus had for the people of His day. He expected them to fully recognize and eagerly await the time of His first coming. Should we expect any less in regard to His second coming? Without a doubt, he holds our generation to the same standard of accountability.

Because the Lord commanded us to be watchful, we need to pay careful attention to today’s headlines.

Here’s a few recent ones:

The 2006 Lebanon war illustrates the danger Israel faces from rocket attacks. If Israel attacks Iran’s nuclear facilities, the odds are good that Iran will supply terrorists on the Israeli border with the means to arm those rockets with chemical, biological, and/or nuclear warheads.

“The French foreign minister suggested that time was indeed short for a solution to the Iranian threat. ‘There is the time that Israel will offer us before reacting, because Israel will react as soon as they know clearly that there is a threat.’ [Read more…]”

As part of an interview with Middle East experts Victor Davis Hanson and Robert Baer, Peter Robinson writes the following in Forbes:

“What is the probability that Israel will strike Iran within the next six months? ‘Forty-nine percent,’ said Baer. ‘I would say 50-50,’ Hanson replied. The final observation: Iran would retaliate. ‘Iran’s deterrent doctrine is to strike back everywhere it can,’ Baer explained. ‘We should expect the worst.’ Iran would attack American supply lines in Iraq and command Hezbollah to start a civil war in Lebanon. It would fire surface-to-surface missiles at every oil facility within range, wreaking devastation in Saudi Arabia and the Gulf states while removing millions of barrels of oil a day from the world markets. The economy of the entire globe would suffer a paroxysm. The Middle East could descend into chaos. The U.S. would experience the worst crisis in decades. [Read more…]”

If anyone doubts the seriousness of this situation, this article should serve as a wake-up call.

“On Oct. 20, DEBKAfile’s military sources disclosed that Syria, Iran’s second ally with an Israeli border, has decided to transfer one-third of its missile stockpile to the Hezbollah in Lebanon, topping up its arsenal with 250 medium-range surface rockets that can cover central as well as northern Israel, which was heavily blitzed in the 2006 war. [Read more…]”

Just as Victor Davis Hanson and Robert Baer suggest, all reports seem to indicate that Iran is arming its allies and sponsored terrorist groups in preparation for a conflict with Israel.

All these headlines point toward impending disaster in the Middle East.

Israel will never allow another Holocaust of the Jewish people to take place. Yet, Amadinejad and his fellow Islamic fanatics are determined to use weapons of mass destruction to eliminate the Jewish state forever.

To this end, Iran has funded terrorists groups like Hamas and Hezbollah on Israel’s borders. They’ve armed them with sophisticated weapons, and given the chance, Iran will provide those same terrorist groups with nuclear, chemical, or biological weapons.

If Israel does strike Iran, and the predictions of Victor Davis Hanson and Robert Baer prove true, Iran will strike back in every way imaginable. In most cases, Iran will use proxy groups to retaliate so they can deflect as much international criticism as possible and play the role of an innocent victim.

In fact, reports that Syria has transferred “one-third of its missile stockpile to the Hezbollah in Lebanon, topping up its arsenal with 250 medium-range surface rockets that can cover central as well as northern Israel” may foreshadow the fulfillment of bible prophecy.

The prophet Isaiah warns of a day when northern Israel will lie in ruin, while Damascus, the world’s longest continuously inhabited city, ceases to exist:

“This message came to me concerning Damascus: ‘Look, Damascus will disappear! It will become a heap of ruins. The cities of Aroer will be deserted. Sheep will graze in the streets and lie down unafraid. There will be no one to chase them away. The fortified cities of Israel will also be destroyed, and the power of Damascus will end. The few left in Aram will share the fate of Israel’s departed glory,’ says the Lord Almighty.” Isaiah 17:1-3 (NLT)

Given the news reports, it’s easy to imagine a scenario in which Syria and Iran use Hezbollah as a proxy to launch WMD rocket attacks on northern Israel. Such attacks would cause widespread devastation, and in all likelihood, Israel would respond in kind, not just against Hezbollah, but Damascus and the other terrorists havens of the region.

Of course, all of this speculation. The exact scenario is not a foregone conclusion. But at some point, Isaiah 17 will be fulfilled. And browsing current headlines, it’s more likely now than ever before…

So does that mean the Forbes article right? Is it “Armageddon Time”?

The battle of Armageddon is not in the immediate future. According to the end times timeline, several additional events must take place before the world’s armies gather at Armageddon.

But the recent rumors of war do constitute a definitive sign of the end times, and if war is on the immediate horizon, it’s possible we could soon witness the fulfillment of Psalm 83, Isaiah 17, and/or Ezekiel 38-39.

Remember the words of our Lord:

“Jesus told them, ‘Don’t let anyone mislead you, for many will come in my name, claiming, ‘I am the Messiah.’ They will deceive many. And you will hear of wars and threats of wars, but don’t panic. Yes, these things must take place, but the end won’t follow immediately. Nation will go to war against nation, and kingdom against kingdom. There will be famines and earthquakes in many parts of the world. But all this is only the first of the birth pains, with more to come.” Matthew 24:4-8 (NLT)

The end is yet to come, but current events in the Middle East constitute a bona fide birth pain signaling the soon coming of our Lord Jesus Christ.

When He comes, let Him find us diligently engaged in His work

Merkel: Nuclear bomb in hands of Iran 'not acceptable' - NECN