I am wearing three hats simultaneously this week in declaring war on the appalling plan by President Obama to morally undermine the stability and effectiveness of our nation's military. As a combination patriotic American citizen, Marine father, and pastoral leader I am compelled to oppose this man's latest assault on a vital national institution.

Obama's declaration to eliminate "Don't Ask, Don't Tell" to fulfill his campaign promise to the Human Rights Campaign and functionally implement an affirmative action system for sexual depravity in every branch of military service would be egregious and offensive at any time. It is even more so in the middle of a war.

The original and blatantly politically correct "compromise" implemented by President Clinton (during his brief tenure with a Democrat majority) to the outright ban on homosexuals in the military has already created confusion in the second-most important function of our federal government. It also paved the way to allowing women in combat – another tragic policy that even President Bush did not reverse. 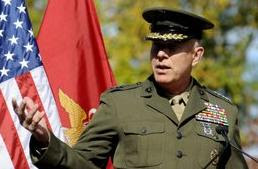 On a military level, the Washington Times reports that Marine Corps Commandant Gen. James T. Conway – apparently the only of his brass peers with brass – has expressed opposition to Obama's plan and the negative impact it would have on cohesion, morale and effectiveness. There are certainly many who are claiming that the gays currently serving (and who obviously have not told) are integrated and not creating any challenges. A 2006 Zogby poll of "545 troops who served in Iraq and Afghanistan" asserts that a growing number of military members are not threatened by the homosexuals they do know.

I have yet to talk to a member of the military who agrees with that assessment.

All we have to do is compare other institutions like our schools, government agencies and the assault on marriage to understand that lifting the ban on open practice of gay, lesbian, bisexual, transgender, etc. behavior would empower the radical activists to do to our soldiers what they have done to our schoolchildren.

With a father-in-law who was one of the "Chosen Few" of the 1st Marine Division during the Korean War, a father who served in the Navy during that period and a son who has served two tours in Iraq with the Corps, I have a deep love for those who have served and are serving our country in harm's way. Their job is not a social service agency or a humanitarian relief organization. It is to kill people and break things. It is to protect the citizens of this country from violent aggressors and defeat those enemies.

It is not to accommodate every deviant social experiment thrust into society.

As we know by past history and even the dramatic rise in the level of posttraumatic stress disorder among returning military men and women, war is already hell. It has never been a picnic, and the military is already a melting pot of many things including spiritual, moral and character qualities of those serving.

Do we think for a minute that the Human Rights Campaign, National Gay & Lesbian Task Force, North American Man/Boy Love Association and every other advocacy group for perversion will not leap to demand "fair treatment," "equal opportunity" and fabricate grievances to accomplish their mission?

Does that make our servicemen and women or our country safer? Of course not – and even beyond the corrosive impact on the military readiness is the elimination of moral standards in another vital institution.

The fact is that our military is a direct function of "We the People" and our government, and it is an unfortunate necessity in a fallen, sin-filled world just like the rest of governing authority. The "Just War Theory" developed by St. Augustine provided what has been the biblical rationale for nations to act to protect their citizens using force and also the limitations on the proper use of that force.

Without moral restraint such as the church and biblical teachings have provided over the centuries, when followed – the military becomes a tyrant and a terror for those who do good and an instrument of those who do evil. History and modernity are filled with those examples.

Moral order and respect for authority are essentials to a functioning military within the parameters we believe given by God, articulated by Augustine and affirmed by this nation since our birth. It has been understood that destruction of the codes of conduct, the concept of chain of command and elimination of swift discipline for violation of essential standards of behavior will destroy the order of the military itself – just as it will for every other institution of importance such as marriage, family, church, business and civil government.

When we honor God in our lives and our institutions we can depend on His blessing and favor against our enemies. When we reject Him we remove ourselves from under His sovereign hand, and tyranny, bondage and military defeat are our rewards.

It is time that men in particular and parents in general send a strong message to the White House that we will not allow this president or his allies on the left in Congress, media and Hollywood to further jeopardize the security of the nation, the moral foundations of our society and the safety of our sons and daughters serving their country!

What does the Bible say about a Christian serving in the military? - GotQuestions.org