The Dark Cloud of Prophetic Judgment Rolling in on the Horizon

At some point in time, the American people need to wake up to the fact that their government is hostile to their best interests. Week after week, the headlines indicate that all three branches of government are acting in the interest of destroying the longstanding and successful Constitutional Republic - the foundation that built the most powerful, most wealthy, most generous nation on earth. But notwithstanding, these same people are ignoring at great peril for both their eternal souls and the well being of their countrymen the true reason America was so great - the belief in and the respect for God Almighty.

Ignoring the wishes of the people, the US House of Representatives is set to pass socialized healthcare. And in that bill are horrible oppressions that if signed into law will be the end to many freedoms Americans currently enjoy. Money will be spent on abortions. Money will be spent to advance the homosexual agenda. Tribunals will be established to determine who receives healthcare. The government will seize control of personal bank accounts by garnishing wages if American workers choose not to participate. All these problems and more in a 1,900 plus page document, so complicated that only the Democrats who wrote the bill know what evils exist within it. 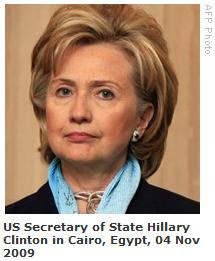 Secretary of State Hillary Clinton stormed through the Middle East and managed to anger everyone. She told Israel to stop building houses in its traditional Biblical lands of Judea and Samaria; told the Pakistanis that we are giving them $7.5 billion in aid and to take the money and quit complaining; told the Palestinians that Israel didn't have to stop building houses in Judea and Samaria; told the people of Yemen and Jordan - two of the wealthiest oil rich nations in the world - that Americans were giving them $106 million to stimulate economic growth for young people; and to top it all off, she told everybody to quit saying nasty things about one another.

When a predominantly Christian nation that has a choice of its rulers, elects usurpers and the godless to rule over them, judgment is not far off. There are natural consequences to bad decisions and there are spiritual consequences to decisions that go against the precepts of God.

"And [they] refused to obey, neither were mindful of thy wonders that thou did among them; but hardened their necks, and in their rebellion appointed a captain to return to their bondage: but thou are a God ready to pardon, gracious and merciful, slow to anger, and of great kindness, and forsook them not."

God hasn't forsaken us, but dark clouds are on the horizon if we do not change our collective national heart.