At a summit meeting of the 27 member states of the European Union, the group selected both the permanent president and the foreign policy chief to lead them into the future, a future that will see this united states of Europe become an even more influential political and economic power on the world stage today. The Prime Minister of Belgium, Herman van Rompuy, was selected by the European Union nations as the President of the Council made up of the 27 member states and from Great Britain, the Baroness Catherine Ashton was elected as the Chief of Foreign Policy for the European Union.

With the ratification of the Lisbon Treaty, which is now the law of the European Union, and the election of the two main leaders of this united states of Europe, the world has witnessed a history making event that will have great impact on world affairs in the future. 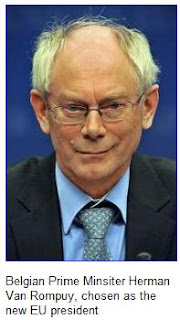 The European Union has made history with the election of its leaders for the future and has moved closer to a role in Bible prophecy as it relates to the end of days.

On March 25, 1957, the Treaty of Rome was signed in the seven hilled city of Rome to form the European Common Market. Now, over 50 years later, the Lisbon Treaty has been ratified and in accordance with the treaty, the member states of the European Union has elected the two most important leaders to take this United States of Europe into the future. History has been made with the ratification of the Lisbon Treaty and the election of these two leaders.