The world watches Afghanistan while US President Barack Obama and his advisers work to decide how to handle the situation there. In the meanwhile, Al Qaeda has not given up its fight in other parts of the world. The terrorist organization and affiliated groups continue to plot terrorist attacks both in the West and the East.

Al Qaeda’s ringleader in the Arabian Peninsula, Abu Basir Nasser al-Wahayshi, is urging Al Qaeda bombers to attack sites in the West using homemade explosives and knives. In the e-magazine Sada al-Malahem, Wahayshi called for the bombing of train stations and airports with small bombs that could be made from items found in the kitchen. He also urged Al Qaeda operatives to make personal attacks on secular media figures who justify the actions of "infidel rulers."

Wahayshi stated that "It is a duty that a Muslim mujahid be busy planning to reap the heads of infidels."

The Saudis have reported finding a cache of almost 300 assault rifles and about 41,000 rounds of ammunition near Riyadh. Al Qaeda has perpetrated a series of bombings on the Arabian peninsula since 2003. In August, a suicide bombing at the port of Jeddah injured Assistant Interior Minister Prince Mohammed bin Nayef, the Saudi prince in charge of Saudi Arabia's anti-terrorism campaign. Even though Saudi Arabia follows a strict reading of the Koran in their government, the kingdom's peaceful alignment with Western powers has made it an object of Al Qaeda violence.

Two men were arrested in Chicago last week in connection with terrorist attacks planned for Denmark and India. Tahawwur Hussain Rana, 48, a Chicago businessman originally from Pakistan, and his friend David Coleman Headley, 49, are accused of plotting to attack The Jyllands-Posten, the Danish newspaper that caused an uproar in the Muslim world by publishing cartoons of Mohammed 4 years ago. 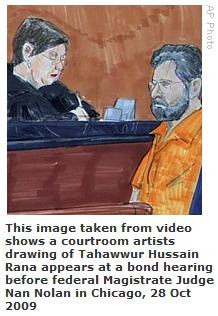 Rana is considered to be the money man behind the plot, but he says he thought the whole thing was just a joke. Headley, who changed his name from Daood Gilani in 2006, traveled to Denmark twice to scope out the newspaper. Headley also made a trip to Waziristan to meet with Ilyas Kashmiri, the head of Al Qaeda's 313 Brigade. Brigade 313 is a coalition of five Muslim terrorist organizations and has been credited with the Mumbai bombing in November 2008 and the Marriott Hotel bombing in Islamabad in September, 2008. In a recent interview from his hideout in Waziristan, Kashmiri told a journalist that the Mumbai bombing was nothing compared to future attacks planned on India.

It is interesting that Brigade 313 enlisted Headley in plots against sites abroad when he would have been more strategically located for attacks on US soil. The fact that Kashmiri met Headley for an attack on India when Headley was already planning to strike Denmark perhaps offers some insight into Al Qaeda’s focus at the moment.

The Taliban was beaten down in Afghanistan, and while it continues to raise its bruised head, Al Qaeda is not as much a danger to world security in Afghanistan as it is in Pakistan. Pakistan, after all, has nuclear weapons. Right now Pakistan's President Asif Ali Zardari is energetically after Taliban in his county. With Zardari, fighting the terrorists is no joke, especially after the Taliban murdered his wife Benazir Bhutto. He's moved troops from Pakistan's border with India to the Afghan border and has forced the Taliban out of the Swat Valley. South Waziristan is now a site for major fighting, and Zardari has plans to move into North Waziristan.

Al Qaeda continues to be a thorn in the world's side. They have not succeeded in any attacks on US soil for many years, but they haven't given up. They've just made a slight adjustment in focus for the moment. They're goal is still to cause disruption and instability, and eventually gain domination of the world for Islam.

Secretary of State Clinton to Pakistan: You Must Help Us Get Al Qaeda - FOX News