What Happened to Global Warming?

For the past couple decades, there has been a growing bandwagon of people who have been telling us that the earth is on track to suffer catastrophic warming from man-generated greenhouse gases. I have been told that drastic action is needed to save ourselves from catastrophe. 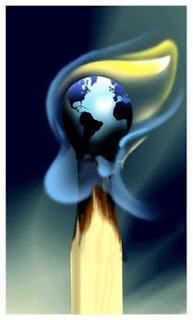 Until the latter part of 2007, we had seen some rather surprising signs of global warming. Here are a few examples:

The whole idea of global warming does make sense. If you add billions of tons of a known greenhouse gas like C02 into the atmosphere, we should expect an increase in the global temperature. Since the dawn of the industrial age, CO2 levels have more than doubled.

Earth has a very complex weather system, so it’s not always clear what impact any type of change will have on the planet. Just as all signs pointed to an apocalyptic future, the threat took a dramatic reversal. The year 2007 started with record warmth, but it ended with record cold. The pattern of low mercury readings continued in 2008.

The year 2009 has been very much on the cool side. The Great Lakes area had one of its coolest summers on record. This past week has seen a long list of record low temps in North America and in Europe. I moved down here to Arkansas hoping to escape Nebraska’s chilly fall temps only to find an endless pattern of cold, rainy days.

Another blow to the climate-change agenda has been the revelation that much of the evidence of a warming climate has been the result of biased reporting. We’ve all been told the polar ice caps are rapidly melting away. The fact is that there is no change in sea ice.

“Thanks to a rapid rebound in recent months, global sea ice levels now equal those seen 29 years ago, when the year 1979 also drew to a close. Ice levels had been tracking lower throughout much of 2008, but rapidly recovered in the last quarter. In fact, the rate of increase from September onward is the fastest rate of change on record, either upwards or downwards” (Daily Tech, 1/1/09).

Rather than question the validity of these most dire forecasts, the press continues to spew out left-wing propaganda. Just this last week, most news outlets ran an article about how the ice caps will be completely gone in 20 to 30 years. The report was from Pen Hadow, an environmentalist whose claim to fame is walking to the north and south pole. He admits his expeditions have added little to the field of science. Nonetheless, Hadow’s prediction was treated as gospel by the media.

Global warming is supposed to increase the severity and frequency of tropical storms. But hurricane and typhoon activity is at a record low. The Weather Channel is very slanted in its coverage of weather events. Despite its forecast of super-hurricanes fed by warmer waters, the Atlantic maps remain mockingly quiet.

The most ridiculous part of the global warming debate is the ideas being proposed by activists like Al Gore. He would have us save the earth with trivial solutions like building more wind mills and taxing people’s carbon emissions. Of course, at the same time, he ignores the fact that several countries are rapidly becoming major producers of greenhouse gasses. China alone opens two power plants each month.

The whole goal of the environmental movement is to bring America under the umbrella of a global nanny organization. California is an early sign of this grab for power. State legislators in the Golden State want to end the use of incandescent bulbs by 2012. They just banned the sale of TVs that use a certain amount of electricity.

The Bible says that someday the world will come under the leadership of one man. The threat of terrorism, economic chaos, and global warming are the three leading reasons cited for why we need to cede our sovereignty to global governance. The way the world is changing right now, it might only take a heat wave in 2010 to push us over the edge.