Thrown Under the Bus and Then to the Wolves

Where is the outrage? Why aren't good Americans by the millions bitterly protesting a Florida judge who has ruled that former Muslim Rifqa Bary, age 17, must return to Ohio? Her parents reside there, and when she lived with them, she became aware that they could kill her for her conversion to Christianity. They would be perpetrating an "honor killing," something common under Sharia Law.

Rifqa and many converts like her are apostates. To make the story worse, her parents are a part of a radical mosque. Rifqa knows that in spite of her father's assertions to the contrary, she has committed one of the worst offenses: Renouncing Allah for Jesus. Living as a Christian in a strict Muslim home is just not an option. 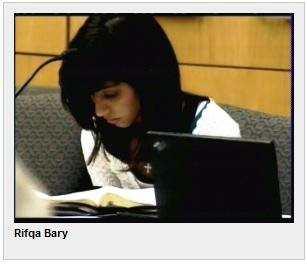 You may not know the rest of the story. As soon as she ran away to Florida, Ohio law enforcement dismissed her charges of abuse before they had even conducted an investigation. A month ago, Ohio Governor Strickland publicly stated that he wanted Rifqa back in Ohio. But Strickland has been a supporter of the Council on American-Islamic Relations (CAIR). Thus, she was not just thrown under the bus, she was also thrown to the wolves.

"Imagine the psychological abuse for a 17 year old girl upon her return. Seventy-five pound Rifqa vs. the Islamic machine. David meets Goliath

."Geller further comments that Rifqa's parents have been very dodgy - even dishonest - on their immigration status. They have consistently refused to produce copies of their immigration documents. It now appears they are in the U.S. illegally.

Geller states that this is a landmark case on many levels. The obvious is the media's censorship. Their bias is so fixed that they would rather put a teenage girl's life at risk than report this story properly. Geller asked another "apostate" (Christian) if Rifqa is safe. That person responded,

"No. She will die. She has gone too far. Islam has to take a stand for this because it is a shame. Rifqa has brought a shame for their religion and for their society."

These kinds of cases pit Sharia Law against the rule of law in America. The U.N. estimates that there are 5,000 honor killings worldwide every year. The U.S. and Canada together have seen at least 20 such murders in the past decade. This is the manifestation of Sharia Law at its worst. It is Muslims slaughtering their own for being too Westernized, dressing improperly, or rejecting Islam.

Rifqa Bary could end up in a foster home in Ohio or she could be hauled off to Sri Lanka with her parents, Mohammed and Aysha Bary. But Rifqa has told a reporter from WFTV in Florida that she expects to be killed if she is forced to return to Ohio.

"No attention has ever been paid, in any official level, to Islamic apostasy law, to the risk that she's under from that, and to the reality of Islamic 'honor killing' in the United States. None of that registered among any of the investigators."

The story isn't over yet. The entire family is to have psychiatric evaluations. If you ask me, officials in Florida and Ohio need the evaluation.

Here's what you can do: Let the powers that be know there are plenty of us who aren't interested in political correctness or cozying up to the "religion of peace" at the expense of a young girl's life. Write Florida's Governor, Charlie Crist: Crist@MyFlorida.com or Ohio Governor Strickland: info@TedStrickland.com.

And pray for Rifqa and her parents. She states,

"In many generations of my family, no one has known Jesus. I am the first. Imagine the honor in killing me."

Barack Obama recently appointed Dalia Mogahed as his advisor on Islamic issues. She is on the President's Council on Faith-Based and Neighborhood Partnerships and recently appeared on a British TV show hosted by members of the extremist Islamist Hizb ut Tahrir Party. This group believes in the non-violent destruction of Western democracy and the creation of an Islamic state under Sharia Law across the world.

When the President of the United States stays silent on the subject of Islamification - or worse, appoints people who want to advance it - one can only surmise that it is something with which he is comfortable.

So there may be more Rifqa Bary's if America is going to go soft on Sharia. Things unthinkable in the Western world may become routine.

The Popular Encyclopedia of Apologetics: Surveying the Evidence for the Truth of Christianity - Ed Hindson (Book)