The European Union (EU) continues to boil within a hotbed of dynamic worldwide economic upheaval. Creation and establishment of a permanent president of the EU is the prime issue on the front burner. Tony Blair, former British prime minister, is at the center of the search for a powerful leader who can take the member states into a position many of the EU architects elite believe will be above that of America as the great world super-nation state. This attitude is reflected in the following statement by an EU letter to the editor.

The EU is on the point of an important change. The American Empire is starting to die and the EU will, slowly and surely, be taking over its role and influence. It is already happening financially as the euro emerges as the world's most reliable currency. Politically too, the EU with its "soft power" is becoming a major diplomatic force. We Europeans are, after more than 60 years, finally ridding ourselves of our dependence on and subservience to the U.S., a fact already recognized by serious politicians on the European mainland. (Rapture Ready News, 10/14/09).

Tony Blair seems the present favorite to be the first permanent EU president. This is due in large part to the strong backing of Italian Prime Minister Silvio Berlusconi on Blair's behalf for the £275,000-a-year post. 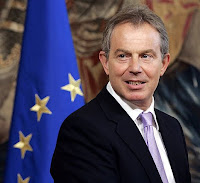 Blair's leading up the list for the position, however, isn't without considerable opposition. Many who object claim that Blair has been too close to the U.S., especially in the matter of support for the overthrow of Saddam Hussein's regime in Iraq and subsequent continuing presence there in order to assure against an occupation by Mid-East terrorist forces.

Opponents of a Blair EU presidency center on the fear he would be an operative more for the U.S. than for Europe. While the Lisbon Treaty has circumvented failure to ratify a EU constitution, and despite the fact that Ireland has finally committed to joining after years of refusal to do so, there are nonetheless hurdles to be overcome. Blair, or whoever becomes the first permanent president of the EU, won't be able to begin acting officially as president until a constitution is ratified.

As example of the raging demand for securing ratification, European Union pressure is tremendous for Czechoslovakian President Vaclav Klaus to sign the Lisbon Treaty, which, in effect, will be a constitution. His counterpart in Poland, president Lech Kaczynski, signed the treaty October 10, leaving the Czech Republic as the only one of the EU’s 27 members that has yet to fully approve a charter intended to streamline the bloc’s decision-making and give it a long-term president and stronger foreign policy chief.

Czech president Klaus has stated at every opportunity that he fears the Lisbon Treaty's ratification would mean an unacceptable loss of national sovereignty and autonomy. This has long been the fear of many within Great Britain's Parliament. Still, the drive is on for finding a man about which Henri Spaak, one of the earlier leaders in searching for a formula for a new European order, said that whether he would be a man or the devil, the new order builders would embrace him. This declaration isn't far afield from what Jesus said about God's chosen people regarding their acceptance of the man of sin over God's Messiah:

"I am come in my Father's name, and ye receive me not: if another shall come in his own name, him ye will receive" (John 5:43).

"Europe had hope for a future, only if a figure of great international caliber, able to warm hearts, to be respected outside Europe and perhaps even feared, but also able to identify the institutions with his leadership, is chosen" (EU Observer/Brussels, Il Foglio [newspaper]).

Bible prophecy foretells the "prince that shall come" from the area that comprised territory in and around the capital of the ancient Roman Empire. He will be a man, according to Revelation 13, who will be head of the composite Beast described in Daniel 7 and Revelation 13:1-3. The final kingdom the Beast will rule will be the worst of all history, according to Jesus himself. That kingdom's nucleus is forming now. This early manifestation of the new Roman order is in the making before our eyes, as represented in the information above.

It seems, in consideration of all of the other profound signals of the coming Tribulation in our headlines, that the coming together of Europe and the creation of the seat of control that will reign over earth's next superpower is a stupendous indicator of where this generation stands on God's prophetic time line..

President Blair would give the EU clout - guardian.co.uk