Copenhagen Goal Is One World Government

A former science adviser to British Prime Minister Margaret Thatcher says the real purpose of the United Nations Climate Change Conference in Copenhagen on Dec. 7-18 is to use global warming hype as a pretext to lay the foundation for a one-world government.

"At [the 2009 United Nations Climate Change Conference in] Copenhagen this December, weeks away, a treaty will be signed," Monckton told a Minnesota Free Market Institute audience on Thursday at Bethel University in St. Paul.

"Your president will sign it. Most of the Third World countries will sign it, because they think they're going to get money out of it. Most of the left-wing regimes from the European Union will rubber stamp it. Virtually nobody won't sign it," he told the audience of some 700 attendees.

"I read that treaty and what it says is this: that a world government is going to be created. The word 'government' actually appears as the first of three purposes of the new entity.

"The second purpose is the transfer of wealth from the countries of the West to Third World countries, in satisfaction of what is called, coyly, 'climate debt' – because we've been burning CO2 and they haven't. We've been screwing up the climate and they haven't. And the third purpose of this new entity, this government is enforcement."

In an hour and a half lecture illustrated by slides featuring scientific data on a wide range of climate issues, Monckton refuted claims made by former Vice President Al Gore in his movie and book entitled "An Inconvenient Truth," as well as scientific arguments made by the United Nations Intergovernmental Panel on Climate Change. 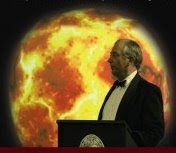 Monckton argued that President Obama will sign the Copenhagen treaty at the December meeting, without seeking a two-thirds ratification of the treaty by the Senate, or any other type of Congressional approval.

"So, thank you, America. You were the beacon of freedom to the world. It is a privilege to stand on this soil of freedom while it is still free," he continued. "But, in the next few weeks, unless you stop it, your president will sign your freedom, your democracy, and your humanity away forever.

"But I think it is here, here in your great nation, which I so love and I so admire – it is here that perhaps, at this eleventh hour, at the fifty-ninth minute and fifty-ninth second, you will rise up and you will stop your president from signing that dreadful treaty, that purposeless treaty. For there is no problem with the climate and, even if there were, an economic treaty does nothing to [help] it."

Monckton is a well-known critic of the theory of anthropogenic causes for global warming who has argued repeatedly that global warming hysteria is an ideological position of the political Left advanced in the interest of imposing global taxes on the United States in the pursuit of international control of the U.S. economy under a one-world government to be administered by the U.N.

Monckton's lecture can be viewed online and his slides also can be accessed on the Internet.

As evidence mounts that the United States is headed toward a cooling cycle that may last decades, global alarmists within the Obama administration remain resolved to push cap-and-trade legislation through Congress on the increasingly dubious theory that man-made carbon emissions are creating global warming.

In what has to be seen as increasingly bad news for global warming alarmists, scientific evidence is mounting that temperatures in the United States have cooled at a rate that would be projected to lower temperatures 7.3 degrees Fahrenheit over the next century (Source: U.S. National Climate Data Center and www.c3headlines.com).

Maybe Obama’s Science Czar is Right: Is a New Ice Age on the Horizon?

Even though Holdren's current position is that the U.S. needs to enact cap-and-trade to slow global warming, Holdren predicted in a 1971 textbook co-authored with Paul Ehrlich that global over-population was heading the Earth to a new ice age unless the government mandated urgent measures to control population, including the possibility of involuntary birth control measures such as forced sterilization.

Holdren's prediction that one billion people would die from a global cooling "eco-disaster" was announced by Malthusian population alarmist Ehrlich in his 1986 book entitled, "The Machinery of Nature."

Holdren based his prediction on a bizarre theory that human emissions of carbon dioxide would produce a climate catastrophe in which global warming would cause global cooling with a resultant reduction in agricultural production resulting in widespread disaster.

On pages 273-274 of "The Machinery of Nature," Ehrlich explained Holdren's theory by arguing "some localities will probably become colder as the warmer atmosphere drives the climactic engine faster, causing streams of frigid air to move more rapidly away from the poles." (Emphasis in original text.)

The movement of the frigid air from the poles caused by global warming "could reduce agricultural yields for decades or more – a sure recipe for disaster in an increasingly overpopulated world," Ehrlich wrote.

The world's future is being decided this weekend - The Guardian