The recent meeting of the United Nations accelerated the prophetic end times as the United States acted as an international community organizer toward a one world order, and one nation, Israel, stood out as a nation besieged by the others. The US still has a way to go before it completely abandons Israel, but the signs are there: The US ambassador attended the Iranian madman's rant against Israel prior to walking out during the speech. The US should have never attended the speech as it knew that Mahmoud Ahmadinejad was going to slander Israel. But the White House is sympathetic to Iran and is currying favor with forces of evil around the world - Russia, Syria, Cuba, Venezuela, Libya and others. 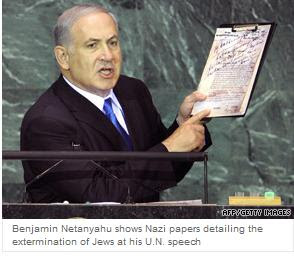 Israeli Prime Minister Benjamin Netanyahu recognizes the shift in American policy toward Israel and the sympathizers of what is evil in the world. In his landmark and prophetic speech to the UN, Netanyahu said,

"But to those who gave this Holocaust-denier a hearing, I say on behalf of my people, the Jewish people, and decent people everywhere: Have you no shame? Have you no decency? A mere six decades after the Holocaust, you give legitimacy to a man who denies that the murder of six million Jews took place and pledges to wipe out the Jewish state. What a disgrace! What a mockery of the charter of the United Nations!"

He reminded the UN that its human rights report accusing Israel of war crimes against Palestinian terrorists was a justification of terrorism. He said,

"If this body does not reject this report, it would send a message to terrorists everywhere: Terror pays; if you launch your attacks from densely populated areas, you will win immunity. And in condemning Israel, this body would also deal a mortal blow to peace...This biased and unjust report is a clear-cut test for all governments."

Netanyahu's answer is found in Zechariah 12:3,

"And in that day will I make Jerusalem a burdensome stone for all people: all that burden themselves with it shall be cut in pieces, though all the people of the earth be gathered together against it."